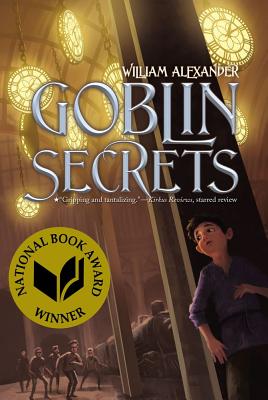 In the National Book Award–winning Goblin Secrets, a boy joins a theatrical troupe of goblins to find his missing brother.

In the town of Zombay, there is a witch named Graba who has clockwork chicken legs and moves her house around—much like the fairy tale figure of Baba Yaga. Graba takes in stray children, and Rownie is the youngest boy in her household. Rownie’s only real relative is his older brother Rowan, who is an actor. But acting is outlawed in Zombay, and Rowan has disappeared.

Desperate to find him, Rownie joins up with a troupe of goblins who skirt the law to put on plays. But their plays are not only for entertainment, and the masks they use are for more than make-believe. The goblins also want to find Rowan—because Rowan might be the only person who can save the town from being flooded by a mighty river.

This accessible, atmospheric fantasy takes a gentle look at love, loss, and family while delivering a fast-paced adventure that is sure to satisfy.

* "Rownie’s search for his brother turns into an unlikely heroic quest. . . . Though highly textured, it’s tightly woven and reassuringly seamless. The result is wryly humorous and bearably yet excitingly menacing: Even while much is left unexplained, Rownie’s triumph is both gripping and tantalizing."--Kirkus Reviews, *STAR

"Alexander has an intriguing central theme, in which masks and theater create actual magic . . . The result is a (sometimes gruesome) fantasy stuffed with interesting ideas."--Publishers Weekly

"The appeal here lies in Alexander’s careful construction of a distinctive world: touches of steampunk can be found in Graba’s geared-up legs and the Mayor’s automaton guards while a more ancient, primal magic seems to guide the goblins and their powerful brand of storytelling. . . . The bittersweet ending remains true to the story’s overall dreamy, melancholic tone."--The Bulletin of the Center for Children's Books

"The story weaves a many-webbed tale, rich in imagination with a fairy-tale feel."--School Library Journal

"William Alexander organizes his atmospheric first novel into acts and scenes, rather than chapters, and he couches it in the beautifully elliptical language of the old fairy tales."
— Washington Post