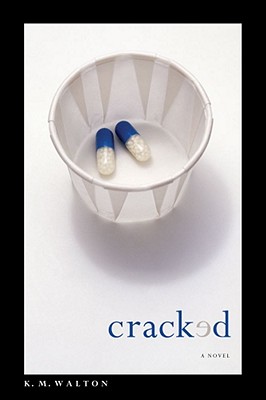 In this gripping debut, a teen takes a bottle of pills and lands in the psych ward with the bully who drove him to attempt suicide.

Victor hates his life. He’s relentlessly bullied at school and his parents constantly ridicule him at home.

Bull is angry. He’s sick of his grandfather’s drunken beatings. And he likes to take out his rage on Victor.

Determined to end it all, Victor takes a bottle of his mother’s sleeping pills—only to be disappointed when he wakes up in the psych ward. And his roommate? None other than Bull, whose loaded-gun effort at self-defense has been labeled as a suicide attempt. Things go from bad to worse—until the boys discover they might just have something in common: a reason to live.

“In this powerful debut novel, K.M. Walton takes an unrelenting look at the corrosive effects of bullying, sometimes coming from where one would least expect it. CRACKED crackles with emotional intensity from beginning to end.”

"Readers who enjoy stories of dysfunction, personal growth, and redemption will love this book."
— VOYA, February 2012

"[Bull's and Victor's] stories offer a strong message of hope to the bullied and abused."
--The Bulletin of the Center for Children's Books, April 2012

K. M. Walton is the author of Cracked and Empty. A former middle school language arts teacher and teaching coach, she is passionate about education and ending peer bullying. She lives in Pennsylvania with her family. Visit her online at KMWalton.com and follow her on Twitter at @KMWalton1.
Loading...
or
Not Currently Available for Direct Purchase