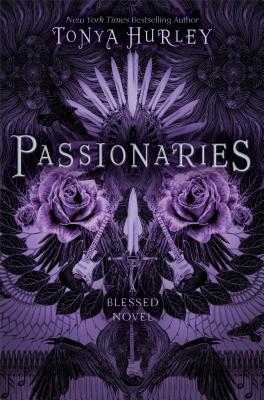 Three modern-day teens have been reincarnated as saints—or so they’ve been told. This dark, thrilling follow-up to Precious Blood blends the gritty with the miraculous.

As we learned in Precious Blood, Agnes, Cecilia, and Lucy “may be saints, [but] they are definitely not angels” (Kirkus Reviews). They watched as Sebastian sacrificed himself for what he believed in, and now they have choices to make of their own. Will the girls trust in their destinies as saints and martyrs and perform the miracles as Sebastian instructed? Or will they lose faith in themselves and each other in his absence? Time is running out for them to make a decision, and the fate of the world lies in the balance.

Praise For Passionaries (The Blessed)…

Chosen by USAToday.com as a HOT NEW ROMANCE!
— --

Revered by some, hunted by others, Lucy, Cecilia and Agnes may have survived the staggering violence that claimed Sebastian’s life, but their hopes of returning to any semblance of normal after the events at Precious Blood are quickly and quite decisively dashed (Precious Blood, 2012).

Their new and very public status as saints has left them targets for haters, most notably an Opus Dei–like faction of the Catholic Church hellbent on killing the girls before they realize their full power. Once again, Hurley brings a dark and shadowy version of Brooklyn to life. It’s the perfect backdrop for this subversive, gritty novel. And while it lacks some of the spectacular drama that characterized the first novel, perhaps since the deliciously nefarious Dr. Frey remains too far in the wings, readers will find plenty to hold their interest. Though the evil doctor sacrifices far too much screen time by relying too heavily on his minions, the girls pick up the slack. Readers will also relate as Lucy, Cecilia and Agnes struggle to make peace with their destinies and to maintain faith in each other and in themselves despite their extraordinary circumstances. At the end of the day, sanctity aside, they are teenagers trying to make sense of the cards they’ve been dealt. Unfortunately for them, the deck is stacked.

"A good story that uses faith as a powerful narrative device. Combine that with first-rate characters, scheming powers that be, and a harrowing plot you have a book that has bestseller written all over it, in big gothic letters."
— The Book Passage

“Brooklyn is the perfect setting for this dark, gritty thriller...Readers can rest assured that while these young women may be saints, they are definitely not angels."
— Kirkus

“Intriguing premise, fiery dialogue, and digs about celebrity-obsessed culture that moves at the speed of Twitter…”
— Publishers Weekly

"...Hurley brings her deadpan wit and blackest humor to the first tale in this trilogy about spirituality, sacrifice and supernatural romance."
— MTV Hollywood Crush

"I loved the unexpected twists in the plot and suspense. I felt really invested in the characters and I felt like it’s one of those books you could read over and over and never tire of. Once I started reading it, I couldn’t put it down!"
— Kara Hayward, star of Moonrise Kingdom

Tonya Hurley is the author of the New York Times bestselling series ghostgirl and the Blessed trilogy. She has worked in nearly every aspect of teen entertainment: creating, writing, and producing two hit TV series; writing and directing several acclaimed independent films; and developing a groundbreaking collection of video games. Tonya lives with her husband and daughter in Brooklyn, New York.