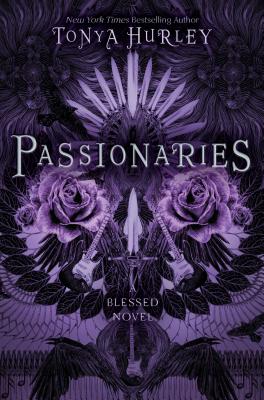 Three modern-day teens have been reincarnated as saints—or so they’ve been told. Kirkus Reviews calls this dark, thrilling follow-up to Precious Blood that blends the gritty with the miraculous “a terrific second volume.”

As we learned in Precious Blood, Agnes, Cecilia, and Lucy “may be saints, [but] they are definitely not angels” (Kirkus Reviews). They watched as Sebastian sacrificed himself for what he believed in, and now they have choices to make of their own. Will the girls trust in their destinies as saints and martyrs and perform the miracles as Sebastian instructed? Or will they lose faith in themselves and each other in his absence? Time is running out for them to make a decision, and the fate of the world lies in the balance.

Praise For Passionaries (The Blessed)…

Chosen by USAToday.com as a HOT NEW ROMANCE!
— --

“Intriguing premise, fiery dialogue, and digs about celebrity-obsessed culture that moves at the speed of Twitter…”
— Publishers Weekly, on Precious Blood

"...Hurley brings her deadpan wit and blackest humor to the first tale in this trilogy about spirituality, sacrifice and supernatural romance."
— MTV Hollywood Crush, on Precious Blood

Tonya Hurley is the author of the New York Times bestselling series ghostgirl and the Blessed trilogy. She has worked in nearly every aspect of teen entertainment: creating, writing, and producing two hit TV series; writing and directing several acclaimed independent films; and developing a groundbreaking collection of video games. Tonya lives with her husband and daughter in Brooklyn, New York.
Loading...
or
Not Currently Available for Direct Purchase