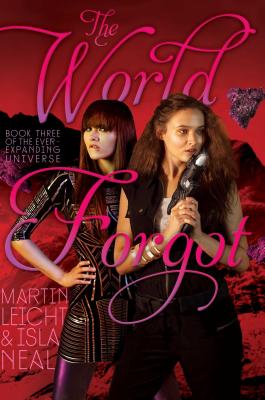 The World Forgot (The Ever-Expanding Universe #3)

“Who knew science fiction about unwed motherhood could be so very hysterical?”—Kirkus Reviews

In this hilarious, action-packed conclusion to The Ever-Expanding Universe trilogy, teen mom Elvie Nara is on a quest across the universe to save her daughter (and maybe stop an alien race war in the process).

After dealing with killer whales, evil scientists, the return of her long-lost mother and, certainly not least of all, the challenges of breastfeeding, Elvie Nara has just about had it. And then the Jin'Kai (along with the aforementioned estranged mom) kidnap her baby.

And before she knows it, another Jin'Kai attack puts her on the run again, but not before discovering that Olivia was implanted with a genetic tracking device. So along with Cole, Ducky, and her dad, Elvie goes back out into space to follow the signal. There she finds evil Dr. Marsden up to some evil tricks and realizes that Mars may hold the secret to defeating her enemies once and for all. So, off to Mars she goes. Because alien race war aside, Elvie really wants to be back with her daughter. For a kid she wasn’t even sure she wanted, Olivia has come to mean the world to Elvie—and she’ll search the universe to be with her again.

Praise For The World Forgot (The Ever-Expanding Universe #3)…

“Juno meets aliens, sort of, in this wacky debut novel. Sixteen-year-old Elvie Nara’s wisecracking voice is the perfect vehicle for her description of encounters with threatening aliens. An extremely clever premise that is skillfully carried off by the authors. Lots of humor, snarky teen comments, and earthy language abound. This reviewer cannot wait to see the next installment of Elvie’s alien encounters. Teens who like irreverent humor, as well as fans of science fiction, are going to enjoy spending time with Elvie and her friends.”
--VOYA on Mothership

Who knew science fiction about unwed motherhood could be so very hysterical?
— Kirkus, on A Stranger Thing

"Elvie’s snarky voice and wise-cracking humor are the perfect complement to the inventive, fast-paced action scenes, which include an attack by human hybrids, more battles with the other aliens, a coordinated pursuit by killer whales, and so much more. The non-stop suspense and the cliffhanger ending will have readers on the edge of their seats and left impatiently waiting for the final installment of Elvie's adventures. The irreverent humor and earthy language make this work of science fiction a comic treat for older teens."
— VOYA, on A Stranger Thing