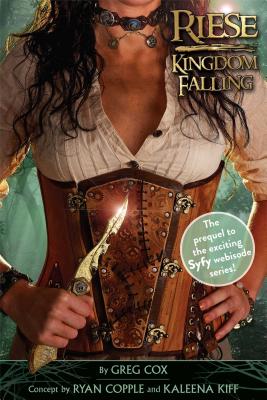 A steampunk princess is torn between love and duty in this prequel to SyFy.com’s wildly popular webisodes.

Riese has never been happy as a princess; she’d much rather be hunting or fighting than sitting through another lesson on court etiquette. When she meets Micah, a wandering artist with a mysterious past, she pretends to be a peasant—it’s a chance to be just a normal girl with a normal boy for a while. But with war decimating her once-proud nation and the sinister clockwork Sect infiltrating her mother’s court, Riese’s moments with Micah are the only islands of sanity left in a world gone mad. As her kingdom falls and the Sect grows ever stronger, will Riese remain true to her duty as a princess…or risk everything on a boy she barely knows?

Greg Cox is the New York Times bestselling author of numerous Star Trek novels and short stories. He has also written the official movie novelizations of War for the Planet of the Apes, Godzilla, Man of Steel, The Dark Knight Rises, Daredevil, Ghost Rider, and the first three Underworld movies, as well as books and stories based on such popular series as Alias, Buffy the Vampire Slayer, CSI, Farscape, The 4400, Leverage, The Librarians, Roswell, Terminator, Warehouse 13, Xena: Warrior Princess, and Zorro. He has received three Scribe Awards from the International Association of Media Tie-In Writers, as well as the Faust Award for Life Achievement. He lives in Lancaster, Pennsylvania. Visit him at GregCox-Author.com.

Ryan Copple studied Forensic Psychology in university, receiving his Masters degree. His first short film "Awkward Silence" screened at multiple theatres across four continents. In addition, "Time Before the Light", a highly stylized fusion of dance and puppetry, which he wrote and directed, has been nominated for two Golden Sheaf awards and four Leo Awards. In 2009, he and Kaleena Kiff co-created and executive produced the critically acclaimed and award winning sci-fi/fantasy webseries "Riese: Kingdom Falling", which was picked up by the Syfy Network’s digital arm, as well as licensed worldwide to NBC/Universal International and Space in Canada. Ryan’s production company Radius Squared Media has numerous projects in development with BBC, Muse, E1 and ContentMedia. Ryan is also a co-owner of the post-production company FrameRate Creative Services in Vancouver, where he currently resides.
or
Not Currently Available for Direct Purchase
Copyright © 2020 American Booksellers Association