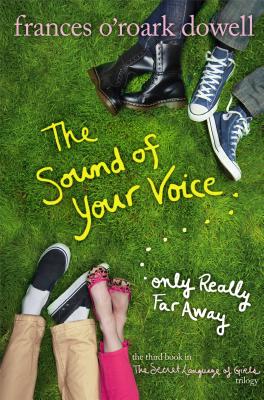 The Sound of Your Voice, Only Really Far Away (The Secret Language of Girls Trilogy)

In the conclusion to the bestselling Secret Language of Girls trilogy, Marylin and Kate find that boys can be just as complicated as friendship.

Marylin knows that, as a middle school cheerleader, she has certain obligations. She has to smile as she walks down the hall, be friends with the right people, and keep her manicure in tip-top shape. But Marylin is surprised to learn there are also rules about whom she’s allowed to like—and Benjamin, the student body president, is deemed unnacceptable. But maybe there is a way to convince the cheerleaders that her interest in Benjamin is for their own good—maybe she’ll pretend that she’s using him to get new cheerleading uniforms!

Kate, of course, finds this ludicrous. She is going to like whom she likes, thank you very much. And she just so happens to be spending more time than ever with Matthew Holler. But even a girl who marches to the beat of her own guitar strings can play the wrong notes—and are she and Matthew even playing the same song? She’s just not sure. So when Matthew tells Kate that the school’s Audio Lab needs funding from the student government, she decides to do what she can to help him get it.

But there isn’t enough money to go around, and it soon becomes clear that only one of the two girls can get her way. Ultimately, though, is it even her way? Or are both girls pushing for something they never really wanted in the first place?

Praise For The Sound of Your Voice, Only Really Far Away (The Secret Language of Girls Trilogy)…

"She refuses to oversimplify, allowing readers access to the girls’ homes as well as school, making it clear that their inner lives are as complicated as their readers’. Secondary characters, especially the girls’ parents, are likewise given satisfying emotional complexity.... readers leave Kate and Marylin poised between childhood and adulthood—they are not finished, but they are on their way."
— Kirkus Reviews, STARRED REVIEW