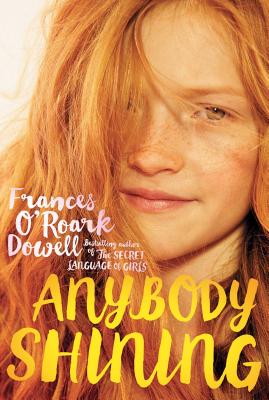 Can one mistake destroy the chance of a lifetime? A girl discovers there are many ways of being true in this magnificent ode to handwritten letters and the shining power of friendship from the author of Dovey Coe, set in the Appalachian mountains of 1920s North Carolina.

One true friend. Someone shining. That’s all twelve-year-old Arie Mae wants. But shining true friends are hard to come by deep in the mountains of western North Carolina, so she sets her sights on a cousin unseen, someone who lives all the way away in the big city of Raleigh, North Carolina. Three unanswered letters later, Arie Mae learns that a group of kids from Baltimore are coming to spend a summer on the mountain.

Arie Mae loves her smudge of a town—she knows there’s nothing finer than Pa’s fiddling and Mama’s apple cake, but she also knows Big City folk might feel differently. How else to explain the song catcher ladies who have descended upon the village in search of “traditional tunes” and their intention to help “save” the townspeople? But when the group from Baltimore arrives, it seems there just might be a gem among them, one shining boy who doesn’t seem to notice Arie Mae wears the same dress every day and prefers to go barefoot. So what if he has a bit of a limp and a rumored heart problem—he also is keen about everything Arie Mae is keen about, and has all the makings of a true friend.

And so what if the boy’s mother warns him not to exert himself? He and Arie Mae have adventures to go on! In between writing letters to her cousin, Arie Mae leads her one shining friend on ghost hunts and bear chases. But it turns out those warnings were for a reason…

“Arie Mae’s openheartedness and yearning for connection make for a deeply poignant story, one with a richly realized setting and cast. As Arie Mae begins to see her life in a new light, Dowell (The Second Life of Abigail Walker) examines the clash between city and country life and what true wealth really means” (Publishers Weekly, starred review).