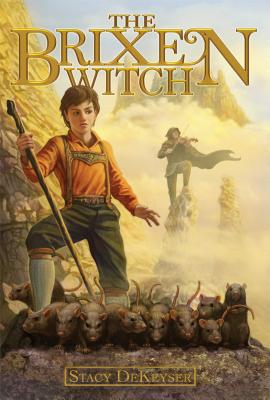 An enchanted coin. A witch’s curse. And rats, rats everywhere! What’s a boy to do?

When Rudi Bauer accidentally takes a witch’s coin, he unleashes her curse. Accident or not, he knows he’s got to fix things, so he tries to return the coin, only to lose it on the witch’s magic mountain just as the snows come. Plagued all winter by terrible dreams, Rudi tries to find the coin again in the spring, but it has vanished—and a plague of rats has descended on his village.
Then a stranger arrives and promises to rid the village of rats—for the price of the missing coin. Desperate to get rid of the rats, the villagers agree—but when they cannot pay, the stranger exacts a price too terrible for anyone to bear. Now Rudi is going to need all his courage—and some help from his savvy grandmother and a bold young girl—to set things right in this fast and funny adventure.

Praise For The Brixen Witch…

“Stacy DeKeyser deftly updates the Pied Piper’s tale. The story scuttles with rats, of course, and you end up reading it on your hind legs.”—Richard Peck, Newbery Award-winning author of A Year Down Yonder

“With lilting language and a unique voice, DeKeyser spins a tale like no other. I loved it!”—Barbara O’Connor, author of How to Steal a Dog

“A surprisingly powerful retelling of the ancient story of the stranger with a magical musical instrument.”—Zilpha Keatley Snyder, three-time Newbery Honor winner

"The folksy language and silhouette spot art give this Pied Piper-inspired story an old-fashioned quality that fans of fairy tales will appreciate."
— School Library Journal

"A well-fashioned addition to the Pied Piper shelf."
— The Horn Book

Stacy DeKeyser is the author of The Brixen Witch, which received two starred reviews and was a Chicago Public Library Best of the Best Pick, and its sequel, One Witch at a Time, as well as the young adult novel Jump the Cracks and two nonfiction books for young readers. She lives in Connecticut with her family. To learn more, visit her online at StacyDeKeyser.com.

John Nickle is the illustrator of Judi Barrett’s Things That Are Most in the World, as well as the author and illustrator of TV Rex, Alphabet Explosion!: Search and Count from Alien to Zebra, and The Ant Bully. He lives in Brooklyn, New York. Learn more about him at JohnNickle.net.
Loading...
or
Not Currently Available for Direct Purchase