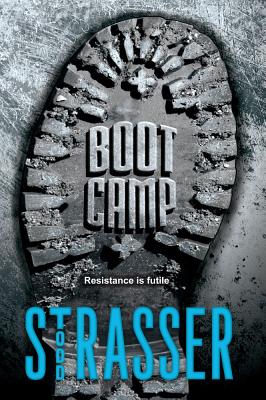 From Todd Strasser, a “truly shocking” (Kliatt) account of the prison-style workings of teen boot camps.

Garrett is an average fifteen-year-old, except that he’s in love with an older woman. Even though Garrett gets good grades and hasn’t had any real discipline problems, his parents decide to ship him off to Harmony Lake, a boot camp for teenagers. He is “kidnapped” by camp employees and transported there, where after a painful attempt at rebellion he quickly figures out that the fastest way to graduate is by following all the rules.

But no matter what rules he follows, Garrett soon realizes that the people who run the boot camp won’t rest until his spirit is well and truly broken. And so, with danger at every turn, he plans a daring escape—with chilling consequences.

"Teens, especially boys, will be riveted...the novel is a real eye-opener."—KLIATT

"Strasser creates characters who will provoke a strong reaction from readers....Teens...will certainly find themselves engrossed in this fast-paced and revealing story about the hidden side of teen incarceration."—School Library Journal

"The real-world issues will hit a nerve."—Booklist

Todd Strasser has written many critically acclaimed novels for adults, teenagers, and children, including the award-winning Can’t Get There from Here, Give a Boy a Gun, Boot Camp, If I Grow Up, Famous, and How I Created My Perfect Prom Date, which became the Fox feature film Drive Me Crazy. Todd lives in a suburb of New York and speaks frequently at schools. Visit him at ToddStrasser.com.
Loading...
or support indie stores by buying on
(This book is on backorder)