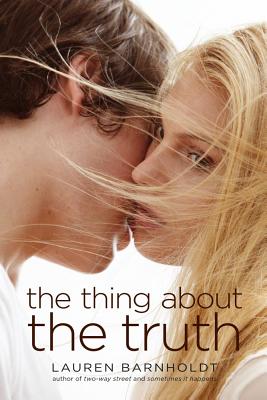 The Thing About the Truth (Paperback)

In this humorous love story from the author of Two-way Street, an unlikely romance is the best sort of surprise—but the wrong secret can ruin everything.

Kelsey’s not going to let one mistake ruin her life. Sure, she got kicked out of prep school and all her old friends are shutting her out. But Kelsey’s focused on her future, and she’s determined to get back on track at Concordia High.

Isaac’s been expelled from more schools than he can count. Since his father’s a state senator, Isaac’s life is under constant scrutiny—but Concordia’s High’s his last stop before boarding school, so Isaac’s hoping to fly under the radar and try to stay put for a change.

When Kelsey and Isaac meet it’s anything but love at first sight. She thinks he’s an entitled brat, and he thinks she’s a stuck-up snob. So it surprises them both when they start to fall for each other. Kelsey’s happy for the first time in months, and Isaac’s never felt this way about anyone before.

But nothing’s ever completely perfect. Everyone has secrets, and Isaac and Kelsey are no exceptions. These two may have fallen hard, but there’s one thing that can ruin it all: the truth.

Lauren Barnholdt is the author of the teen novels The Thing About the Truth, Sometimes It Happens, One Night That Changes Everything, Two-way Street, Right of Way, and Watch Me. She is also the author of the middle grade novels The Secret Identity of Devon Delaney, Devon Delaney Should Totally Know Better, Four Truths and a Lie, Rules for Secret-Keeping, Fake Me a Match, and the Girl Meets Ghost series. She lives in Waltham, Massachusetts. Visit her at LaurenBarnholdt.com.

Praise For The Thing About the Truth…

"Barnholdt's snappy dialogue and deftly woven flashbacks will keep readers turning the pages in comic suspense. Romance fans will find the conclusion satisfying even as it is refreshingly messy. --Kirkus Reviews