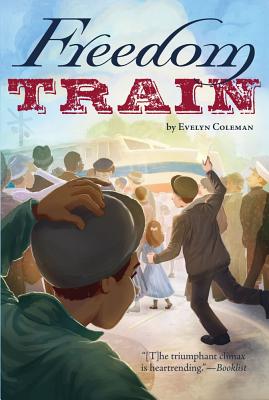 Now in paperback, an enthralling account of a young boy’s struggle to help freedom triumph over fear in the 1940s American South.

It’s 1947, and twelve-year-old Clyde Thomason is proud to have an older brother who guards the Freedom Train—a train that is traveling to all forty-eight states carrying the country’s most important documents, including the Declaration of Independence and the Bill of Rights. Clyde is chosen to say the Freedom Pledge at the train’s stop in Atlanta, but his terrible stage fright forces him to refuse the honor. Instead, it’s the class bully, Phillip, who gets selected, and he begins to torment Clyde. When an African-American boy saves him from a beating, Clyde is shocked. Especially when he learns that William lives in the white part of town. How can this be? And why can’t he bring himself to be friends with William?

Clyde hasn’t told his parents he won’t perform the pledge, nor has he mentioned his confusing friendship with a boy of color. So when the townspeople threaten William’s family, Clyde has a choice to make: Will he keep quiet, or stand up for real freedom?

Evelyn Coleman’s books include To Be a Drum; White Socks Only; The Riches of Oseola McCarty, a Smithsonian Notable Book and a Carter G. Woodson Honor Book; and Born in Sin. Evelyn lives in Atlanta, Georgia, where she received the Atlanta Mayor’s fellowship for achievement in children’s literature. Visit Evelyn online at EvelynColeman.com.
or support indie stores by buying on
Copyright © 2020 American Booksellers Association