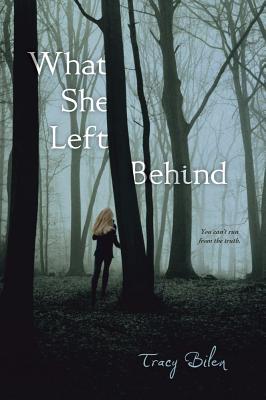 In this suspenseful thriller, Sara and her mother are going to secretly escape her abusive father—when her mother mysteriously disappears.

Sara and her mom have a plan to finally escape Sara’s abusive father. But when her mom doesn’t show up as expected, Sara’s terrified. Her father says that she’s on a business trip, but Sara knows he’s lying. Her mom is missing—and her dad had something to do with it.
With each day that passes, Sara’s more on edge. Her friends know that something’s wrong, but she won’t endanger anyone else with her secret. And with her dad growing increasingly violent, Sara must figure out what happened to her mom before it’s too late…for them both.

Praise For What She Left Behind…

"In her debut young adult novel, Bilen takes us into the world of family secrets from a teen’s point of view. The ending includes a twist that will keep readers on the edge of their seats, and yet, once the book is closed, Sara’s story will remain with readers. This is truly a remarkable story of resilience with broad appeal for teens."
--VOYA, April 2012

"Quickly paced and with a dramatic conclusion."
--SLJ, June 2012

Tracy Bilen is a high school teacher in Michigan where she lives with her husband and two children. She enjoys cross-country skiing and walks in the woods. You can visit Tracy online at tracybilen.com or on Twitter at @tracybilen.
Loading...
or
Not Currently Available for Direct Purchase