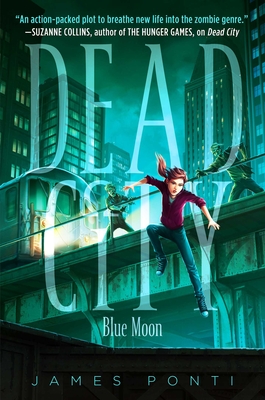 Molly is ready for more nonstop, undead action in this follow-up to Dead City, which Kirkus Reviews described as “a fast-paced read for those who like their zombies with just a little fright.”

When Molly Bigelow discovered that zombies shared New York with humans, she didn’t think life could get more shocking. Then she learned that her mother was once one of the greatest zombie killers ever—and she discovered that her dead mother is not technically dead at all (although she isn’t alive, either).

Molly’s efforts to keep these secrets and to help her Omega team track down the identity of the original thirteen zombies will take her from the Macy’s Thanksgiving Day parade to New Year’s Eve in Times Square. Her loyalties to friends and family will be put to the test. And her life will be changed in ways she never could have imagined.

James Ponti was born in Italy, raised in Florida, and went to college in California. After receiving a degree in screenwriting from the USC Film School, he began a career writing and producing television shows for the likes of Nickelodeon, Disney Channel, PBS, Spike TV, History Channel, and Golf Channel. James loves writing, travel, and the Boston Red Sox. He lives with his family in Orlando, Florida.
or support indie stores by buying on
Copyright © 2020 American Booksellers Association