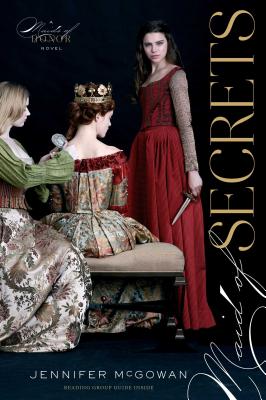 Maid of Secrets (Maids of Honor)

In this “lively and fast-paced debut” with “plenty of action and plot twists” (Kirkus Reviews), a secret society of young women make up Elizabeth I’s most trusted royal guard. If God won’t save the Queen…they will.

Orphan Meg Fellowes makes her living picking pockets—until she steals from the wrong nobleman. Instead of rotting in prison like she expected, she’s whisked away to the court of Queen Elizabeth and pressed into royal service, where she joins four other remarkable girls in the Maids of Honor, the Queen’s secret society of protectors.

Meg’s natural abilities as a spy prove useful in this time of unrest. The Spanish Court is visiting, and with them come devious plots and hidden political motives. As threats to the kingdom begin to mount, Meg can’t deny her growing attraction to one of the dashing Spanish courtiers. But it’s hard to trust her heart in a place where royal formalities and masked balls hide the truth.

Meg’s mission tests every talent she possesses, even her loyalty to her fellow Maids. With danger lurking around every corner, can she stay alive—and protect the crown?

Praise For Maid of Secrets (Maids of Honor)…

"Whether recounting her perilous missions or her moral dilemmas, Meg’s first-person narrative is consistently engaging. Meg’s adventure comes to a satisfying conclusion while leaving the door open for sequels."

"This lively and fast-paced debut has plenty of action and plot twists to keep readers fully engaged."

"This novel encompasses all the glory, excess, and intrigue of Queen Elizabeth I’s reign; the issues surrounding Catholicism versus the Church of England; and the poor relationship between Spain and England. Full of adventure and romance and starring a very likable, spunky protagonist, this is an enjoyable historical read."

Jennifer McGowan was born in Ohio, grew up in Montana, and studied in Paris. She fell in love with the Elizabethan era as a college student and is now an unrepentant scholar of the period, happily splitting her time between the past and present. An RWA Golden Heart Award winner and multiple finalist, Jenn is the author of the Maids of Honor series. She lives in Ohio. Visit her (and the Maids of Honor) at JenniferMcGowan.com.
Loading...
or support indie stores by buying on