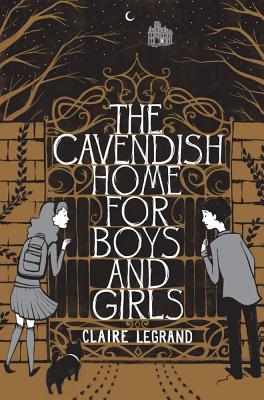 The Cavendish Home for Boys and Girls

At the Cavendish Home for Boys and Girls, you will definitely learn your lesson. A dark, timeless, and heartfelt novel for fans of Coraline and The Mysterious Benedict Society.

Victoria hates nonsense. There is no need for it when your life is perfect. The only smudge on her pristine life is her best friend Lawrence. He is a disaster—lazy and dreamy, shirt always untucked, obsessed with his silly piano. Victoria often wonders why she ever bothered being his friend. (Lawrence does too.)

But then Lawrence goes missing. And he’s not the only one. Victoria soon discovers that The Cavendish Home for Boys and Girls is not what it appears to be. Kids go in but come out…different. Or they don’t come out at all.

If anyone can sort this out, it’s Victoria—even if it means getting a little messy.

Praise For The Cavendish Home for Boys and Girls…

The Cavendish Home for Boys and Girls is weirdly charming and creepy. I loved the intrepid girl hero Victoria and her determination to save her best friend from the scariest Home ever. An enormously fun--and shivery--read.
— Sarah Prineas, author of The Magic Thief series

A heartwarming friendship tale—played out amid carpets of chittering insects, torture both corporal and psychological, the odd bit of cannibalism and like ghoulish delights.
Being practically perfect in every way and someone who “never walked anywhere without extreme purpose,” 12-year-old Victoria resolutely sets about investigating the sudden disappearance of her scruffy classmate and longtime rehabilitation project Lawrence. After troubling encounters with several abruptly strange and wolfish adults in town, including her own parents, she finds herself borne into the titular Home by a swarm of 10-legged roachlike creatures. This abduction quickly leads to the discovery that it’s not an orphanage but a reform school. There, for generations, local children have had qualities deemed undesirable beaten or frightened out of them by sweet-looking, viciously psychotic magician/headmistress/monster bug Mrs. Cavendish. Victoria is challenged by a full array of terror-tale tropes, from disoriented feelings that things are “not quite right” and “[s]harp, invisible sensations, like reaching fingers” to dark passageways lined with rustling roaches and breakfast casseroles with chunks of…meat.
A thoroughgoing ickfest, elevated by vulnerable but resilient young characters and capped by a righteously ominous closing twist. (Horror fantasy. 11-13)
— Kirkus, starred review

" The too-serene-to-be-true town of Belleville harbors some creepy secrets in Legrand's debut, a sinister and occasionally playful tale of suspense. Twelve-year-old perfectionist Victoria Wright has bouncy curls, a fixation on achieving straight As, and just one friend—unkempt, artistic Lawrence, who she considers her "personal project." But when Lawrence disappears, and Victoria launches an investigation to find him, she discovers more frightening trouble than she imagined. Victoria unravels the mystery behind the titular home for children, which is run by the ageless Mrs. Cavendish and a fiendish gardener/assistant. Hair-raising adventures involving slimy hidden passageways, pinching swarms of cockroaches, mystery meat, and the wrath of cruel Mrs. Cavendish fill the pages. Legrand gives Victoria's mission a prickly energy, and her descriptions of the sighing, heaving home—a character in itself—are the stuff of bad dreams. Watts's b&w illustrations of spindly characters, cryptic shadows, and cramped corridors amplify the unsettling ambiance, and her roach motif may have readers checking their arms. Ages 10–up."
— Publisher's Weekly

"Insidiously creepy, searingly sinister, and spine-tinglingly fun, this book also presents a powerful message about friendship and the value of individuality."
— Joy Fleishhacker

Sarah Watts is an illustrator of fabric lines, books, and other printed delights. She is married to an adventure junkie and she collects old treasures. Sarah is also the Alumni Board of Trustee member for Ringling College of Art and Design (RACD).
Loading...
or support indie stores by buying on