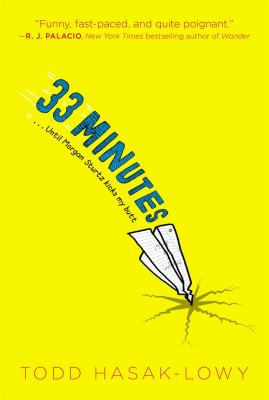 Will Sam’s best friend turn out to be a bully? He’s about to find out in this “strong and refreshingly straightforward portrait of identity and shifting-friendship trials” (School Library Journal).

Sam Lewis is going to get his butt kicked in exactly thirty-three minutes. He knows this because yesterday his former best friend Morgan Sturtz told him, to his face and with three witnesses nearby, “I am totally going to kick your butt tomorrow at recess.”

All that’s standing between Sam and this unfortunate butt-kicking is the last few minutes of social studies and his lunch period. But how did Sam and Morgan end up here? How did this happen just a few months after TAMADE (The Absolutely Most Amazing Day Ever), when they became the greatest Alien Wars video game team in the history of great Alien Wars teams? And once the clock ticks down, will Morgan actually act on his threat?

Told with equal parts laugh-out-loud humor and achingly real emotional truth, 33 Minutes shows how even the best of friendships can change forever.

Todd Hasak-Lowy has published several books for adults. 33 Minutes was his first book for young readers and he made his YA debut with Me Being Me Is Exactly as Insane as You Being You. He lives with his wife and two daughters in Evanston, Illinois.

bethany bARTon is an author and illustrator whose debut picture book, This Monster Needs a Haircut, was published in July 2012. She sat at the theater geeks table in middle school.
or
Not Currently Available for Direct Purchase
Copyright © 2020 American Booksellers Association