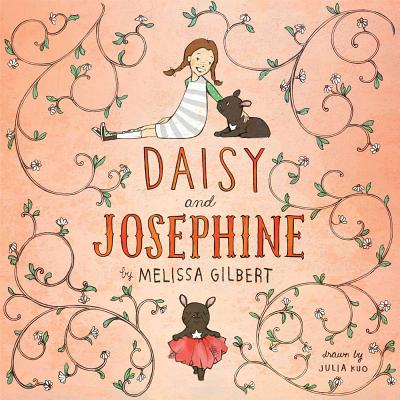 Everyone has a favorite person, and Daddy is Daisy’s. But when the two of them are on the road for Daddy’s work, Daisy sometimes feels lonely. She is very shy and wishes she had a friend. So Daddy gets Daisy a surprise: a funny-looking puppy named Josephine. They make quite a pair—Daisy with her overbite and Josephine with her underbite. Will Daisy’s rambunctious new friend help bring her out of her shell?

This charming story of an unlikely friendship, based on actress and New York Times bestselling author Melissa Gilbert’s own childhood and her very own French bull dog named Josephine is one that everyone can relate to.

“I’m so excited to share the story of Daisy and Josephine,” Melissa says. “I hope it will inspire children to be brave, to sing, and to always shine brightly!”

Melissa Gilbert starred as Laura Ingalls Wilder on the hit NBC television show Little House on the Prairie. She has starred in numerous movies and plays and served two terms as president of the Screen Actors Guild. She is the author of Prairie Tale, Daisy and Josephine, My Prairie Cookbook, and Back to the Prairie. She resides in the Catskills and New York City with her husband, Timothy Busfield.

Julia Kuo is the creator of 20 Ways to Draw a Cat and 44 Other Awesome Animals as well as the charming board book Everyone Eats. Julia also created the cover and interior artwork for Newbery Medal–winning author Cynthia Kadohata’s The Thing About Luck and Place to Belong and New York Times bestselling author Jenny Han’s Clara Lee and the Apple Pie Dream. She lives in Chicago. Find out more online at JuliaKuo.com.
Loading...
or
Not Currently Available for Direct Purchase