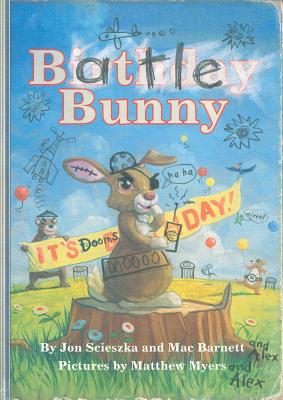 Encourage creativity with this wildly entertaining picture book mash-up from the minds of Jon Scieszka and Mac Barnett.

Alex has been given a saccharine, sappy, silly-sweet picture book about Birthday Bunny that his grandma found at a garage sale. Alex isn’t interested—until he decides to make the book something he’d actually like to read. So he takes out his pencil, sharpens his creativity, and totally transforms the story!

Birthday Bunny becomes Battle Bunny, and the rabbit’s innocent journey through the forest morphs into a supersecret mission to unleash an evil plan—a plan that only Alex can stop.

Featuring layered, original artwork that emphasizes Alex’s additions, this dynamic exploration of creative storytelling is sure to engage and inspire.

* “An enthusiastically taboo, devil-may-care outing for combat fans—and a great writing inspiration to use on old books headed for the bin.”
— Kirkus

* "This deliciously subversive piece of metafiction skewers--with sharp wit and a sharper pencil--the earnest, purposeful literature so popular in the middle of the last century."
— Booklist, starred review

* "This is a perfect book to give independent readers who are looking for something a little different. The unique layout and design will inspire creativity in readers."
— School Library Journal, in a starred review

* "Battle Bunny makes for great entertainment: it's funny, the plot builds, and the protagonist captivates readers' attention. It also begs to be reread and shared. Kids will be eager to compare notes and to relive it with their friends."
— Shelf Awareness, starred review

"This book says 'Welcome!' to children."
— The New York Times

* "The resulting text is thus an honest reflection of the ways kids interact with books—in a way that’s accessible to kids themselves—as well as a complexly layered work of comic genius."
— BCCB, in a starred reviewe

Matt Myers has illustrated more than a dozen books, including The Most Terrible of All, A Dog Named Doug, the New York Times bestseller Battle Bunny, and The Infamous Ratsos, a Theodor Seuss Geisel honor book. He lives in Charlotte, North Carolina. You can see more illustrations and fine art at MyersPaints.com.
Loading...
or support indie stores by buying on