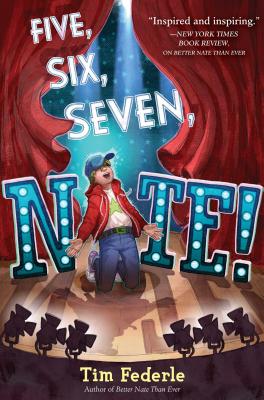 “The Nate series by Tim Federle is a wonderful evocation of what it’s like to be a theater kid. Highly recommended.” –Lin-Manuel Miranda, star and creator of the musical, Hamilton

The companion novel to Better Nate Than Ever, which The New York Times called “inspired and inspiring,” Five, Six, Seven, Nate! is full of secret admirers, surprise reunions, and twice the drama of middle school...with a lot more glitter.

"With wit and panache, Five, Six, Seven, Nate! shows us that though we may face huge obstacles, we can and should still dare to dream big. These books, like their protagonist, have a heart as big, bright, and bold as Broadway."
— Anne Ursu, author of Breadcrumbs

* "Nate will sing and dance his way right into readers’ hearts. This is an encore performance that will leave them standing in the aisles."
— Kirkus Reviews, starred review

*"[A] funny, tender coming-of-age story, which doubles as an insider account about growing up on stage that will appeal to every budding theater geek. Encore!"
— Publishers Weekly, starred review

"[Five, Six, Seven, Nate!] provides a plot-driven, exaggerated exposé behind the scenes of a Broadway show that’s sure to entertain, and it continues to use Nate’s naïveté and the zany characters of the theatre for laugh-out-loud levity...Nate’s encore—an extravagant companion toTelgemeier’s Drama—will certainly be applauded by his loyal fan base."
— BCCB

"Everyone could use a little more glitter in their lives, and Nate shares his with those who are willing to celebrate that being an understudy can one day earn you top billing."
— School Library Journal

"Readers will cheer Nate along while also relating to him because, as Nate sagely observes, Broadway is just “like a junior high school cafeteria but with more glitter.”
— Booklist

“The Nate series by Tim Federle is a wonderful evocation of what it’s like to be a theater kid. Highly recommended.”
— Lin-Manuel Miranda, star and creator of the musical, Hamilton

Tim Federle is “a prolific scribe whose breezy wit isn’t bound to a single genre” (Huffington Post). Tim’s award-winning novels include The New York Times Notable Books The Great American Whatever and the Nate series—which Lin-Manuel Miranda called “a wonderful evocation of what it’s like to be a theater kid.” Tim cowrote both the Tony-nominated Broadway musical Tuck Everlasting, and the Golden Globe and Oscar–nominated Best Animated Feature Ferdinand, starring John Cena and Kate McKinnon. A native of San Francisco who grew up in Pittsburgh, Tim now divides his time between New York and the internet (@TimFederle).
Loading...
or
Not Currently Available for Direct Purchase