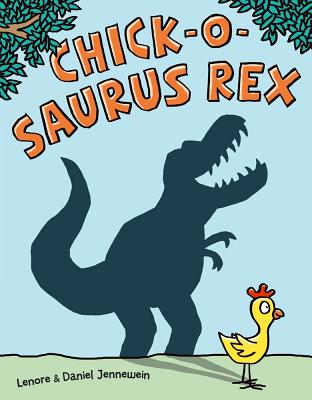 A bullied little chicken discovers his inner strength along with some surprising dinosaur ancestry in this farmyard tale with huge heart.

Little Chick just wants to belong, but the bullies of the barnyard—Little Donkey, Little Pig, and Little Sheep—won’t let him play in their tree house because he is a chicken, and chickens are not strong and brave. Little Chick sees their point: What have chickens done besides invent the chicken dance and cross the road? But when his father shows Little Chick the family photo album, he learns something HUGE: He is related to the gigantic and ferocious Tyrannosaurus rex!

Armed with this new knowledge, Little Chick returns to the tree house just in time to rescue the bullies from a scary wolf—and prove that strength and bravery have nothing to do with size.

"Dinosaur-loving youngsters will warm to Little Chick, whose courage has nothing to do with his size."
— School Library Journal

"Full of energy and humor, the bold digital artwork creates cartoonlike effects with black, expressive lines and flat colors. The story is satisfying as well."
— Booklist

Lenore Jennewein is the author of the picture book Chick-o-Saurus Rex and, writing as Lenore Appelhans, the author of the teen novel Level 2. She lives in Frankfurt, Germany, with her illustrator husband Daniel Jennewein and their three cats. Visit her at PresentingLenore.blogspot.com, where she has been blogging about YA lit since 2008.

Daniel Jennewein is the illustrator of several picture books for children, including Is Your Buffalo Ready for Kindergarten?, written by Audrey Vernick, and Chick-O-Saurus, written by his wife, Lenore. His wife, writing as Lenore Appelhans, is also the author of the teen novel Level 2. They live in Frankfurt, Germany, with their three cats. Visit Daniel at DanielJennewein.com.
Loading...
or support indie stores by buying on