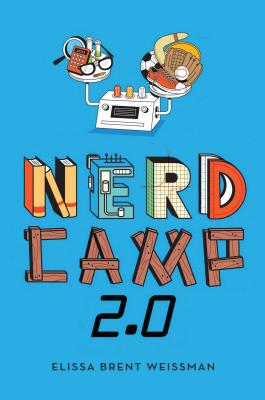 Gabe’s happily headed back to Nerd Camp—but can he handle a cool-kid invasion?

For Gabe, the equation for ideal summer bliss equals six glorious weeks of vigorous learning immersion at the Summer Center for Gifted Enrichment—aka, Nerd Camp. Last year was amazing, and this summer will be even better.

At least, that’s what Gabe thinks until a new variable is introduced: Zack, Gabe’s cool stepbrother, was supposed to attend a camp nearby, but in the aftermath of a recent wildfire, Zack’s camp and nerd camp will be sharing territory. As these two very different worlds collide, will both camps—and both stepbrothers—survive the summer?

"Elissa Brent Weissman has whipped up a clever, funny and moving story. Her characters consistently defy stereotype, revealing fascinating layers that make them feel startlingly real and relatable. Whether you're a science fiend, a jock or something in between, you'll love spending time at Nerd Camp."

— Stuart Gibbs, author of SPY SCHOOL and BELLY UP

"This worthy sequel picks up almost a year after Nerd Camp (2011) left off.... Weissman’s dialogue is particularly entertaining in the back-and-forth between Gabe and his sweet and brainy bunkmates."
— Booklist, June 2014

Drew Willis is an art director and illustrator working in New York City. Visit him at DrewWillis.com.
Loading...
or support indie stores by buying on