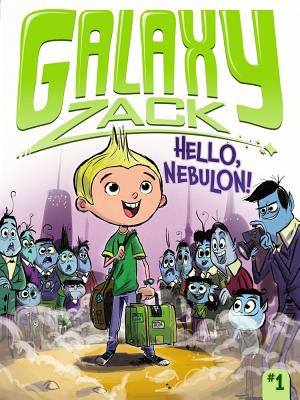 “Zack Nelson is moving to a new house, a new school -- and a new planet! Eight-year-old Zack and his family have loaded up their family space cruiser and are off to Nebulon, where his father has a new job and his mother plans to open a boutique selling Earth items to Nebulites. While he is very sad to have left his best friend, Bert, and his dog, Luna, Zack quickly finds some things to like about his new life ' like the 'Indoor Robotic Assistant,' who manages the house, and the bed that folds up into his ceiling every morning and never has to be made. This chapter book for beginning readers wonderfully addresses all the typical worries of a childhood move.”
— julie A. Baker, Eight Cousins, Falmouth, MA
View the List

Get to know Galaxy Zack—and his new home planet!—in this start to an out-of-this-world illustrated chapter book series.

In Hello, Nebulon!, Zack makes the big move from Earth. He is already nervous about starting school and making new friends, but it only gets worse when he dreams that his classmates are slimy aliens with tentacles, pizza comes covered in gross bugs, and he can never communicate with his Earth friends again! Fortunately, when Zack arrives at Sprockets Academy for his first day of school, he meets and befriends Drake Tucker, a Nebulite boy who also loves to explore and learn about the planets. Nebulon isn’t as awful as Zack’s dream, but there are a lot of differences between Nebulon and Earth, and they make Zack miss his home in Dubbsville, Texas, even more. But things start to look up when he receives a mysterious surprise. What could it possibly be?

With easy-to-read language and illustrations on almost every page, the Galaxy Zack chapter books are perfect for beginning readers.

Ray O’Ryan has loved space stories ever since he watched the very first episode of Star Trek. He loves to imagine what traveling across the galaxy might be like and is a bit jealous of Galaxy Zack in this regard. Ray lives in the beautiful Catskill Mountains in upstate New York with his wife and two lovable, zany cats named Stitch and The Way.

Colin Jack is originally from Vancouver, Canada, and has illustrated several children’s books. He currently works at DreamWorks Animation as a story artist and character designer and lives in the Bay Area with his wife and two sons.
or support indie stores by buying on
Copyright © 2020 American Booksellers Association