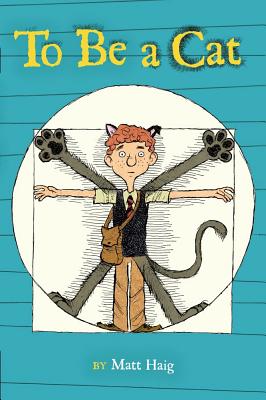 To Be a Cat

Cats have it made. They laze in sun patches, are showered with affection by loving humans, can cough up hairballs wherever they want, and never have to wonder why their dad disappeared one day and never came back. It’s clearly much easier to be a cat than to be a middle school boy.

Praise For To Be a Cat…

"Peppered with quirky illustrations, the story features extreme characters and circumstances in the tradition of Roald Dahl.... Haig's cautionary tale is a unique one, and Barney's struggles will be understood by readers who are uncomfortable in their own skin."
— School Library Journal, July 2013

"Barney wasn’t all that happy as a 12-year-old boy. First his dad moved out of the house, then disappeared altogether. His mum seems rushed and preoccupied. The school bully victimizes him mercilessly, and the principal regards him as her personal enemy. Still, after wishing to be a cat and magically becoming one, Barney desperately wants his old life back. Wishing got him into his predicament, but it’s just not enough to get him out of it. The plot takes some unexpected turns...the telling is engaging, and its generally light tone gives readers hope, even at the darkest moments. Barney makes a sympathetic protagonist, both as a boy and as a cat. Witty and sometimes exaggerated ink drawings with gray washes capture human expressions and feline body language with equal facility, and the jacket art is sure to attract readers."
— Booklist Online, July 2013

Matt Haig is the bestselling author of several books including the Alex Award–winning The Radleys, Humans, and The Midnight Library. An alumnus of Hull University and Leeds, his work has been translated into twenty-nine languages. He lives in York with his wife, UK novelist Andrea Semple, and their two children.

Stacy Curtis is the illustrator of The 7 Habits of Happy Kids series by Sean Covey. He lives with his wife and dog in Oak Lawn, Illinois.
Loading...
or
Not Currently Available for Direct Purchase