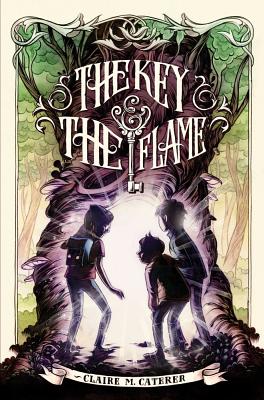 The Key & the Flame

In this middle-grade fantasy adventure, a gutsy girl unlocks a magical universe—and the danger that lies within.

Eleven-year-old Holly Shepard longs for adventure, some escape from her humdrum life. That is precisely what she gets when she is given an old iron key that unlocks a door—in a tree.

Holly crosses the threshold into a stunning and magical medieval world, Anglielle. And as she does so, something unlocks within Holly: a primal, powerful magic. Holly is joined on her journey by two tagalongs—her younger brother Ben, and Everett, an English boy who hungers after Holly’s newfound magic and carries a few secrets of his own.When Ben and Everett are sentenced to death by the royals, whose fear of magic has fueled a violent, systemic slaughter of all enchanted creatures, Holly must save them and find a way back home. But will she be able to muster the courage and rise above her ordinary past to become an extraordinary hero?

Praise For The Key & the Flame…

Filled with swordfights, spells, and an endearing cast of creatures, Holly’s journey makes for a rousing adventure. Chronicles of Narnia fans will rally around this debut fantasy novel and ask for the forthcoming sequel.
— Library Media Connection

“A fun-filled read… a solid fantasy in the classic tradition. The multi-threaded narrative offers a variety of young heroes for readers to root for, and it’s jam-packed with memorable secondary characters of the magical sort, like sleek leogryffs, tricky fairies, and a talking cat.”
— The Bulletin

Claire M. Caterer is the author of The Key & the Flame and its sequel The Wand & the Sea. She lives in Kansas with her family. Visit her at ClaireCaterer.com.
Loading...
or
Not Currently Available for Direct Purchase