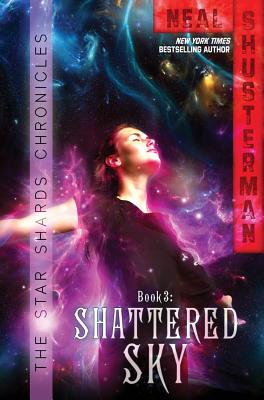 In this conclusion to The Star Shards Chronicles, powerful and terrifying invaders have arrived from a parallel dimension, and only the Star Shards can prevent the destruction of the human race.

Six children were conceived at the exact moment that the star Mentaras-H went supernova, and the explosion transformed their souls into living star fragments. Now the Star Shards face the ultimate battle—and the true purpose of their gifts be revealed, for it is no accident they have these powers. Once despised for their “deformities,” the Star Shards are now worshiped and feared as gods. Their power is unlimited, as is the temptation to abuse it. But a new and terrifying force has torn a wound in the universe, infecting it like a deadly, intelligent virus. Only one power exists that could conceivably prevent the extermination of the human race: the Star Shards. But only if they can put aside their titanic egos and join forces one final time.

Acclaimed author Neal Shusterman’s “talent for depicting superhuman characters with human strengths and weaknesses lends depth and immediacy to a tale of cosmic proportions” (School Library Journal) in this stunning conclusion to a visionary trilogy.

Originally published by Tor Fantasy in 2002.

Neal Shusterman is the New York Times bestselling author of more than thirty award-winning books for children, teens, and adults, including the Unwind dystology, the Skinjacker trilogy, Downsiders, and Challenger Deep, which won the National Book Award. Scythe, the first book in his latest series, Arc of a Scythe, is a Michael L. Printz Honor Book. He also writes screenplays for motion pictures and television shows. Neal is the father of four, all of whom are talented writers and artists themselves. Visit Neal at StoryMan.com and Facebook.com/NealShusterman.
or
Not Currently Available for Direct Purchase