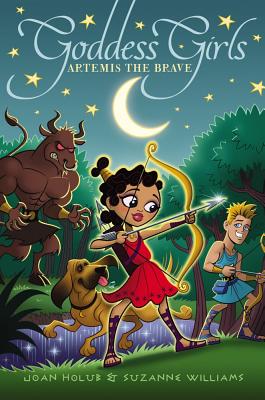 Artemis is known for being the most courageous girl at Mount Olympus Academy. Little do her friends and classmates know that, even though she’s fearlessly awesome at archery, the creatures they learn about in Beast-ology class—such as the ring-nosed Minotaurs and scorpions—scare her as much as they frighten everyone else!

But what is scaring her even more are her growing feelings for Orion: She’s never had a crush before! Will she find the courage to talk to Orion and ace her Beast-ology class?

Suzanne Williams is a former elementary school librarian and the author of over seventy books for children, including the award-winning picture books Library Lil (illustrated by Steven Kellogg) and My Dog Never Says Please (illustrated by Tedd Arnold), and several chapter book and middle grade series. She also coauthors the Goddess Girls and Thunder Girls series with the fantastic Joan Holub. Visit her at Suzanne-Williams.com.
or support indie stores by buying on
(This book is on backorder)
Copyright © 2020 American Booksellers Association