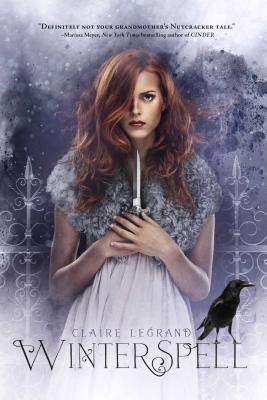 Darkly romantic and entirely enchanting, this reimagining of The Nutcracker from Claire Legrand brims with magic, love, and intrigue. New York Times bestselling author Marissa Meyer (Cinder) says “this is not your grandmother’s Nutcracker tale.”

What a mesmerizing whirlwind of a story! I was simultaneously horrified and enchanted by the land of Cane, with all its passion and mysteries, magic and mechaniks. Claire Legrand’s writing has the grace of a ballet, but this is definitely not your grandmother’s Nutcracker tale.
— Marissa Meyer, New York Times bestselling author of Cinder

“The story of The Nutcracker receives a sinister steampunk twist in an engrossing retelling. Legrand's story is rich in fantastical realism…”
— Publishers Weekly

Claire Legrand used to be a musician until she realized she couldn’t stop thinking about the stories in her head. Now Ms. Legrand is a full-time writer living in New Jersey. She has written two middle grade novels—The Cavendish Home for Boys and Girls, one of the New York Public Library’s 100 Titles for Reading and Sharing in 2012, and The Year of Shadows—as well as the young adult novel Winterspell. Visit her at Claire-Legrand.com and on Twitter @ClaireLegrand.
Loading...
or
Not Currently Available for Direct Purchase