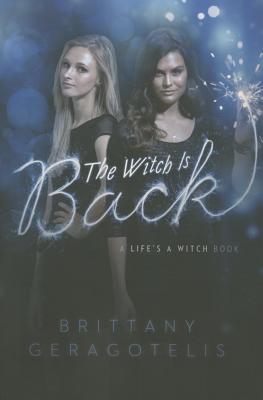 The Witch Is Back (Life's a Witch)

When two gorgeous, popular teen witches clash over a guy, it’s magical mayhem in this conclusion to the Life’s a Witch trilogy!

It’s been a trying year for teen witch Hadley Bishop—she led her coven into battle against the Parrishables and lost her mother in a surprise attack. Now that the Parrishables and their leader, Samuel Parris, have been defeated, Hadley is looking forward to a relaxing, love-filled summer with boyfriend Asher Astley.

Hadley’s summer plans take an unexpected turn though when she and her coven head off to a witchy summer intensive. Once there, Hadley immediately finds herself in a power struggle with Brooklyn Sparks. Like Hadley, Brooklyn is gorgeous and popular, but she’s also…Asher’s ex-girlfriend?!

As if this news isn’t enough to rattle Hadley, there are rumors of a rogue witch in the woods, and someone is playing dangerous pranks around camp. Hadley suspects that Brooklyn is behind the pranks, but is she willing to risk losing her friends and Asher to prove it? In this electrifying conclusion to the Life’s a Witch series, Hadley will discover that love is more powerful than any spell—but it comes with a price.

Brittany Geragotelis, a former Olympic-bound gymnast and magazine editor, is a self-professed pop culture junkie turned author. Her paranormal action book Life’s a Witch received 18 million reads on the writing site Wattpad.com. What the Spell is the first published book in the series, followed by Life’s a Witch and The Witch Is Back. Brittany lives in Los Angeles with her husband, Matt, and two cats, Murray and Cohen. Visit her at BrittanyGeragotelis.com.
Loading...
or support indie stores by buying on