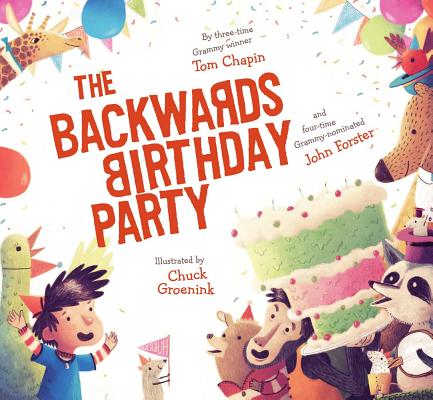 Have a happy birthday—the backwards way! Full of fun and based on the hit song from Tom Chapin and John Forster, this is a celebratory birthday bash like no other.

Put your clothes on inside out, heat up the ice cream, and hang on to your party hats—because everything’s out of whack at the backwards birthday party!

Praise For The Backwards Birthday Party…

"What if birthdays were backward?.... A bouncing, jovial rhyme describes the reversed sequencing.... Colorful, appealing illustrations portray the boy and his animal friends with just the right amount of detail as they eat cake first thing (hurray!) and the boy wraps presents and hands them out to each animal...all is smooth and silly here. Youngsters will giggle along with this lighthearted selection as they relish all the important moments that birthdays bring and learn about sequencing and time in an enjoyable way. A nice selection for any collection and, of course, an excellent birthday present."
— Kirkus Reviews, November 2014

"[A]n admirably illustrated version of a catchy tune created by Chapin and Forster in 1994 on the album Zig Zag. Youngsters will delight in the story’s wackiness.... Nonconformity abounds.... The birthday boy, with his modish look, is surrounded by almost two-dozen happy animal friends in colorful yet muted tones created with pencil, Photoshop, and gouache. The detailed illustrations, the backwards text, and the illogical succession of events offer great opportunities for discussion, especially letter knowledge and narrative skills, and, of course, there’s the added benefit of singing the text as well. Music is included on the endpapers."
— School Library Journal, December 2014

"A topsy-turvy song from Chapin’s 1994 children’s recording, Zag Zig, becomes an equally zippy picture book.... Madcap silliness reigns “at the backwards birthday party!/ the partyday birthwards back,” and Groenink (Santa Clauses) keeps pace, creating a rowdy menagerie of animal partygoers (an ape puffs into the wrong end of a clarinet, a cat and goose share a pair of pants) who sing and dance the night away—or is it morning? The mixed-media illustrations hum with energy, movement, and color, capturing the spirit of this anything-goes celebration."
— Publishers Weekly, December 2014

Tom Chapin has entertained, amused, and enlightened audiences of all ages for more than forty years and through twenty-seven CDs, eight Grammy nominations, three Grammy awards, and thousands of live performances. A pioneer in the field of children’s music, he is also a respected singer-songwriter and a strong advocate for the arts in education. Tom lives in Piermont, New York. Find out more at TomChapin.com.

John Forster is a singer-songwriter, playwright, and humorist whose acclaimed output includes musicals on and off Broadway, Grammy-nominated recordings, humor books, and many delightful projects for children, including the perennial stage musical How to Eat Like a Child and a dozen albums with Tom Chapin. John’s comedy CDs include Entering Marion, Helium, and Broadsides, a duet album with Tom featuring their satire for NPR. John lives in South Nyack, New York. For more information visit JohnForster.com.

Chuck Groenink is the illustrator of The Backwards Birthday Party and a few other books. Originally from the Netherlands, he now lives with his wife and cats in Valatie, New York. When not drawing pictures for books, he likes to read, bake bread, or go hiking, and he wishes he could play the banjo. Visit him online at ChuckGroenink.com.
Loading...
or
Not Currently Available for Direct Purchase