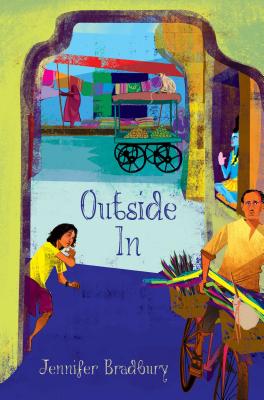 “A compassionate story of homelessness and friendship, recycled art and community.” —Kirkus Reviews

A twelve-year-old boy living on the streets of Chandigarh, India, stumbles across a secret garden full of sculptures and sees the possibility of another way of life as he bonds with the man who is creating the garden in this searingly beautiful novel—based on a true story.

Twelve-year-old Ram is a street boy living behind a sign on a building’s rooftop, barely scraping by, winning games of gilli for money, occasionally given morsels of food through the kindness of Mr. Singh, a professor and father of his friend Daya.

But his prowess at gilli (an outdoor game similar to cricket) is what gets him into big trouble. One day, when he wins against some schoolboys fair and square, the boys are infuriated. As they chase Ram across town, he flings his small sack of money over a factory gate where no one can get it, and disappears into the alleyways. But someone does get the money, Ram discovers when he sneaks back later on to rescue what is his—a strange-ish man on a bike who also seems to be collecting…rocks? Ram follows the man into the jungle, where he finds something unlike anything he’s seen—statues, hundreds of statues…no, thousands of them! Gods and goddesses and buildings, all at half scale. What is this place? It seems that the rock collecting man, Nek, has built them all! When Nek discovers that Ram has followed him, he has no choice but to let the boy stay and earn back the money Nek has already spent. How else can he keep him quiet? For his creations lie on land that isn’t technically his to build on.

As Ram and Nek hesitantly become friends, Ram learns the true nature of this hidden village in the jungle, as well as the stories of Shiva and Lord Rama, stories of gods and goddesses that in strange ways seem to parallel Ram’s…and Nek’s.

Based on the true story of one of India’s most beloved artists and modern day folk heroes, Nek Chand was a real man—a man displaced from his home in the midst of war and conflict; a man who missed his home so terribly he illegally reconstructed his entire village in miniature out of found objects and rock, recreating mosaic statues and sculptures spanning acres of jungle. Though Ram is a fictionalized character, Nek’s artwork is real. Intertwined with mythology and the sociopolitics of India, this is an exquisitely wrought, unexpected, and singular tale about the connection of community and how art can help make us human.

Jennifer Bradbury is the author of the middle grade novel River Runs Deep and of several critically acclaimed young adult novels, including A Moment Comes, Wrapped, and her debut, Shift—which Kirkus Reviews called “fresh, absorbing, compelling” in a starred review. Shift was picked as an ALA and a School Library Journal Best Book for Young Adults and is also on numerous state reading lists. She taught in Chandigarh, India, and teachers still in Burlington, Washington, where she lives with her family.
Loading...
or support indie stores by buying on
(This book is on backorder)