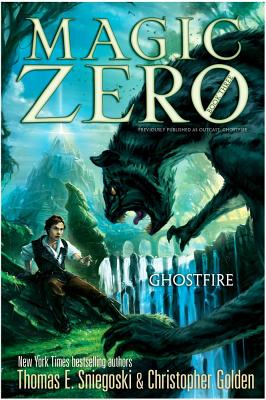 Despite shunning Timothy since his arrival in Arcanum, the government has now turned to him for help. Raptus, the vicious leader of the dragon race called the Wurm, is determined to break through the magical barrier that separates his world from Sunderland and exact vengeance upon the mages. The Wurms need Timothy’s unique form of non-magic—his ability to invent things—to prepare for the inevitable battle.

Timothy sets out with his mentor, Leander, to the site of the barrier, but over the course of the trip Leander’s behavior evolves from erratic to dangerous—so much so that Cassandra is named Grandmaster of the Order of Alhazred. Can Timothy and Cassandra find the source of the Leander’s transformation before it destroys them all?

This third book in the Magic Zero quartet, originally known as the Outcast series, features a refreshed cover and an unforgettable adventure.

Christopher Golden is the New York Times bestselling author of novels for adults and younger readers. In addition to the Magic Zero quartet, his YA fiction includes Poison Ink and both the Prowlers series and the Body of Evidence series of teen thrillers, several of which have appeared on the YALSA Best Books for Young Readers list. His current work-in-progress is Cemetery Girl, a graphic novel trilogy collaboration with Charlaine Harris. He has cowritten three illustrated novels with Mike Mignola, the first of which, Baltimore, or The Steadfast Tin Soldier and the Vampire, was the launching pad for the Eisner-nominated, New York Times bestselling comic book series Baltimore. As an editor, he has worked on the short story anthologies The New Dead, The Monster’s Corner, and 21st Century Dead, among others, and has also written and cowritten video games, screenplays, and a network television pilot. His original novels have been published in more than fourteen languages in countries around the world.
Loading...
or support indie stores by buying on
(This book is on backorder)