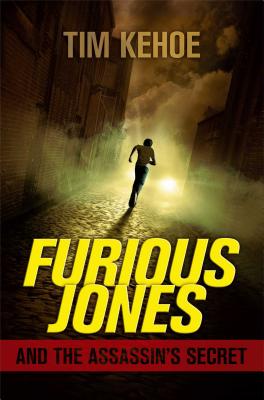 When his dad’s book turns out to contain deadly secrets, twelve-year-old Furious Jones is thrust into a web of mystery and danger in this gripping page-turner.

Furious Jones, the twelve-year-old son of a famous thriller writer, lives with his grandfather after his mother was mysteriously gunned down right in front of him a year ago. Curious to know more about his estranged dad, he goes to see him speak about his upcoming novel to a packed audience—and to his shock and horror, he witnesses his father get shot as well.

When Furious discovers that his dad’s upcoming novel contains dangerous and fiercely protected secrets, he sets out to discover who killed his father, and what exactly they were trying to cover up.

Ideal for fans of Alex Rider and Theodore Boone, the action-packed exploits of Furious Jones are as thrilling as they are intriguing. Can Furious unravel this literary mystery before the death toll rises?

Tim Kehoe was an author and the inventor of numerous toy products, including the world’s first colored bubbles, called Zubbles, and he was named one of America’s 100 Best by Reader’s Digest. In 2005, Zubbles was awarded Popular Science’s Grand Prize for Innovation.

Praise For Furious Jones and the Assassin's Secret…

"[An] exciting, rapid-rire mystery . . . Right from the start, Kehoe ratchets up the paranoiac tension and adrenaline . . . [T]his adventure works very well as a over-the-top thriller, one that leaves room for sequels."
— Publishers Weekly
or
Not Currently Available for Direct Purchase
Copyright © 2020 American Booksellers Association