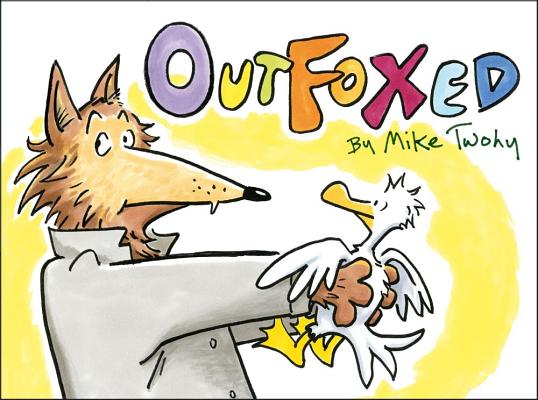 Quack, quack—woof? A quick-thinking duck keeps a fox on his toes in this witty romp from a New Yorker cartoonist.

One dark night in the henhouse, a hungry fox in search of his dinner gets more than he bargains for. Instead of a chicken, Fox grabs a duck. A very smart duck. A duck so sly, he plans to convince Fox that he isn’t a duck but a—dog! Yes, a dog.

This clever story and its accompanying visual narrative will delight readers young and old—because if it looks like a duck, and it quacks like a duck, it HAS to be a duck…right?

K-Gr 2–If it looks like a duck, and quacks like a duck…but wait, this white-feathered yellow-billed bird is barking like a dog, slobbering like a dog, chewing up socks like a dog. What gives? That’s what Fox wants to know after he inadvertently grabs a duck out of the henhouse intent on enjoying a chicken dinner. But maybe a duck will do? Clever duck manages to avoid the cookpot by declaring, “You are mistaken, sir. I am NOT a DUCK!” and adopting a variety of classic doggy behaviors such as wagging her tail and peeing on the carpet. Finally, Fox relents and takes the “dog” back to the farm where she belongs, only to find a surprise in the house that blows the lid off the whole ruse. The hilarious illustrations sketched with marker and colored pencil are designed like large comic book panels and have a real slapstick appeal that is perfectly suited to the comedic text. Kids will love being in on the joke, and the large word bubbles make reading easy even for beginners. Don’t be outfoxed. Get quacking and buy this book.
— School Library Journal

A conniving fox breaks into a henhouse one night and makes off with what he
thinks is a chicken. When he arrives home, he discovers that the bird he stuffed into
his coat pocket is actually a duck—or is it? The clever duck pretends to be a dog,
carrying his ruse to elaborate lengths, from barking and wagging his tail (well, his
tailfeathers) to chewing up the fox’s clothes and peeing on the carpet. The puzzled
fox is bamboozled by this behavior and returns the duck/dog to the farm, explaining
that “foxes don’t eat dogs and foxes don’t have pets.” After returning home, the fox
wonders if maybe he should have kept the little guy after all—until he spots the
egg that the “dog” left behind and realizes he’s been played. The story unfolds in
panel sequences like a comic, with in-image dialogue the only words, and Twohy
adeptly uses that format to successfully convey both the humor and the drama of
this interlude between fox and duck. The narration of the text is peppered with
asides in speech balloons from the duck and the fox, and the duck’s formal address
of the fox (“You are mistaken, sir. I am NOT a DUCK!”) also adds to the humor.
The duck’s doglike behavior (especially the peeing on the carpet) will cause giggles,
and kids will enjoy being in on the duck’s deception. The lively illustrations, rendered
in marker and colored pencil, have a casual but controlled line, and the clear
compositions and expressive figures make the action easy to follow. The mostly
accessible vocabulary and brevity of the text will put this within reach of many
primary grade readers and the comic-like format may appeal to reluctant readers.
This would be a “quacker-jack” addition to a duck- or fox-themed storytime, or
an interesting title to contrast with Beatrix Potter’s lengthier The Tale of Jemima
Puddle-Duck. JH
— Bulletin

by Mike Twohy; illus. by the author

Fox faces a dilemma after a late-night chicken heist. He had broken into the henhouse under the cover of darkness; back in his brightly lit den, he’s surprised to find that he’s nabbed a duck by mistake. The problem? The duck claims to be a dog, sniffing and slobbering and wagging with puppy-like enthusiasm. Fox is skeptical. Duck, however, is very convincing, and by the time Duck “runs into [the] living room and pees on [the] carpet,” Fox gives up for the night: “I might still have you for breakfast.” Duck’s bold scheme (and Fox’s credulity) will thrill young readers, even those who’ve previously encountered the old dinner-tricks-predator-and-gets-away premise. Cartoonist Twohy knows how to wield a black line; his comical illustrations are integral to the storytelling, conveying tone and helping to advance the story. The straight-faced narrator’s commentary—“in the morning Fox wakes up to hot duck breath and a wet face”—manages to play up the farce while letting Duck’s shenanigans speak for themselves. Fox is howling mad to discover he’s been hoodwinked, but storytime audiences will howl with laughter when Fox finds what the “little doggie” left behind. The yolk’s on Fox, but at least he can have the egg for dinner. kitty flynn

Mike Twohy is a Geisel Honor Award–winning author and illustrator of several books for children, including Poindexter Makes a Friend, Outfoxed about which The Horn Book said, “story time audiences will howl with laughter,” Wake Up, Rupert!, and Mouse and Hippo, which the School Library Journal called “a story time hit.”  He has been a longtime contributor of cartoons to The New Yorker. He lives with his wife, cats, and yellow Lab in Berkeley, California.
Loading...
or support indie stores by buying on