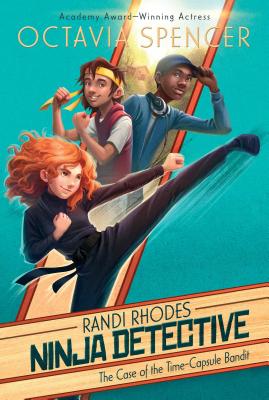 The Case of the Time-Capsule Bandit (Randi Rhodes, Ninja Detective #1)

Deer Creek is a small town whose only hope for survival is the success of their Founder’s Day Festival. But the festival’s main attraction, a time capsule that many people believe hold the town’s treasure, has gone missing.

Twelve-year-old Randi Rhodes and her best friend, D.C., are Bruce Lee–inspired ninjas and local detectives determined to solve the case. Even if it means investigating a haunted cabin and facing mean old Angus McCarthy, prime suspect.

They have three days to find the treasure…the future of their whole town is at stake! Will these kids be able to save the day?

Vivienne To has illustrated several books, including The Underland Chronicles by Suzanne Collins and the Randi Rhodes, Ninja Detective series by Octavia Spencer. As a child, she had two pet mice escape. She currently lives in Sydney, Australia, with her partner and her ginger cat. Visit her at VivienneTo.com.
Loading...
or support indie stores by buying on