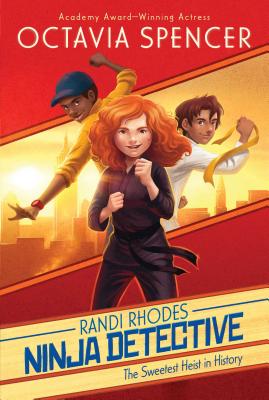 A hard-to-prove art heist in New York City becomes a mystery for ninja detective Randi Rhodes in this second book in a series full of humor, adventure, and heart from Academy Award–winning actress Octavia Spencer.

Randi Rhodes and her fellow ninja detectives, DC and Pudge, were flying high after solving the Case of the Time-Capsule Bandit. But life in sleepy Deer Creek has begun to feel…a bit boring. There are no crimes to investigate! But a trip to New York City to visit Randi’s aunt changes that! While the ninja detective trio explores Randi’s old neighborhood in Brooklyn, they uncover an art theft. Except no one will believe them. So they’ll just have to catch the criminals in the act...

this novel will keep young readers guessing...readers will appreciate Randi’s determination to make a difference. A quick read about a girl sleuth whose fiery determination will leave readers wanting Book 2.
— Kirkus Reviews, on The Case of the Time-Capsule Bandit

An entertaining, suspenseful read.
— Booklist, on The Case of the Time-Capsule Bandit

A host of quirky supporting characters provide warmth in this cozy little mystery while Randi herself is eminently likable, an appealing mixture of bravado and vulnerability as she tries to crack the case, negotiate her relationship with her dad, and come to terms with her mother’s recent death. Academy Award–winner-turned-author Spencer lays out an inviting mystery perfectly suited for younger readers.
— Bulletin, on The Case of the Time-Capsule Bandit

Spencer has created a clever mystery ....Providing a list of ninja tasks at the end of the book, she may make heroes of us all.
— Booklist Online

This book will satiate any young detective’s thirst for mystery.
— School Library Journal

Vivienne To has illustrated several books, including The Underland Chronicles by Suzanne Collins and the Randi Rhodes, Ninja Detective series by Octavia Spencer. As a child, she had two pet mice escape. She currently lives in Sydney, Australia, with her partner and her ginger cat. Visit her at VivienneTo.com.
Loading...
or support indie stores by buying on