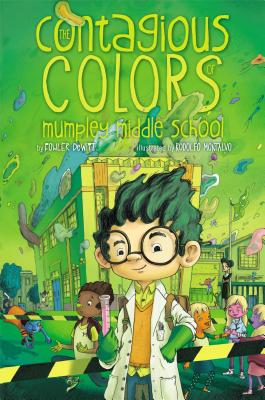 Something strange is happening to the sixth grade—and it’s up to student scientist Wilmer Dooley to crack the case in this fast-paced novel full of humor and mystery.

If there’s one important thing Wilmer Dooley’s dad always says, it’s this: “Where are my car keys?”

Okay, maybe not that. He also says: “Observe!”

Wilmer has always known that the greatest science comes from the keenest observations. So when he observes his classmates looking a little green…and orange...and chartreuse-fuchsia polka-dotted...he knows that it’s up to him to find the cause of this mysterious illness—and the cure.

But with his arch nemesis, Claudius Dill, hot on his heels; the eagle-eyed biology teacher, Mrs. Padgett, determined to thwart his plans; and a host of fluorescent classmates bouncing off the walls at increasingly dangerous speeds, can Wilmer prove he has what it takes to save the sixth grade from a colorful demise before it’s too late?

Rodolfo Montalvo started drawing so early in life that he doesn’t even remember when he first started doing it. No matter where he was or what he did growing up, drawing was always a part of him. Today, he feels very fortunate to be able to work as an illustrator and hopes to keep drawing and writing into old age alongside his wife, René, who is also an artist. Montalvo lives in Long Beach, California, and you can visit him online at RodolfoMontalvo.com.

Praise For The Contagious Colors of Mumpley Middle School…

"Wilmer Dooley is a budding scientist, and he has a serious crush on fellow sixth-grader Roxie McGhee. So when a virus breaks out at school, and Roxie falls ill, Wilmer dedicates himself to finding the cure, which could also win him the sixth-grade science medal. The virus turns people vibrant colors and gives them excessive energy, just one of the offbeat touches in this exuberant novel from DeWitt (a pseudonym for author Allan Woodrow), which mixes Wilmer’s scientific journal entries into a lively third-person narrative. The gross factor is high, with vivid descriptions of the vomit and mucus Wilmer collects as samples for his investigation. Adults are generally useless and bumbling, leaving the real work to the kids. Wilmer’s nemesis, Claudius, plots against him, as does evil science teacher Valveeta Padgett, but the good guys have science on their side as they fight for the cure and the medal. Filled with entertaining twists and nutty characters, DeWitt’s story celebrates friendship and perseverance."
— Publishers Weekly, September 2013

"THE CONTAGIOUS COLORS OF MUMPLEY MIDDLE SCHOOL by Fowler DeWitt is funny, educational and fast-paced, holding interest for the reader throughout the entire book. The actual historical and scientific facts added to the humorous content are an important facet of the book—it brings every character and the story line to life. Family values are integrated into the story as well as the friendships and hardships associated with being a middle school student. DeWitt's descriptive words and phrases are fabulous. Wilmer's journal entries are such an asset to the contents of the story. It gives you the firsthand thoughts of an intelligent, observant and thoughtful sixth grader."
— KidsReads.com, September 16, 2013

"A fun, fast-paced story that should appeal to a wide range of both reluctant and avid middle grade readers."
— Library Media Connection, January/February 2014

"Wilmer Dooley wants to be a scientist when he grows up.... He approaches life using observations and hypotheses to figure out everything from how to get his crush, Roxie, to notice him to solving the mysterious epidemic that is plaguing the students of Mumpley Middle School. The epidemic begins with a cold, but soon turns the students pink, purple, green, polka dot, plaid, etc., all while giving them boundless energy. The number of infected keeps increasing, and Wilmer believes that by finding the cause and cure, he will not only help his fellow students but also win the coveted medal. Unfortunately, Claudius Dill, his nemesis, has the same idea. However, the attempts by science teacher Mrs. Padgett to thwart him and Claudius's tricks are no match for Wilmer's determination. Ultimately the two boys find that they must work together to find the cure before it's too late. Wilmer is a likable protagonist who approaches life with caution but isn't afraid to dive in and get his hands dirty when necessary. Quirky and humorous, this book will find an appreciative audience. The over-the-top digs at our junk-food culture and the silly character names add to the enjoyment."
— School Library Journal, November 2013