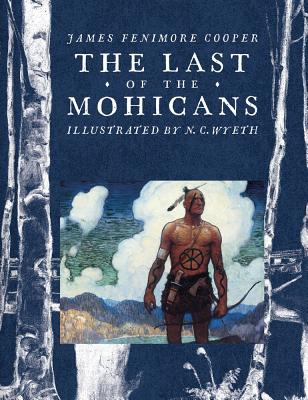 The Last of the Mohicans (Scribner Classics)

Chingachgook and Uncas are the last living members of the great Mohican tribe. Hawkeye, a colonial scout, is their companion and loyal friend. In the midst of the French and Indian War, these three will risk everything to lead the two daughters of a British colonel to safety through the battle-torn northern wilderness. When the girls are captured by the vicious Huron tribe, Chingachgook, Uncas, and Hawkeye determine to do whatever they can to save them—no matter the cost.

James Fenimore Cooper (1789–1851) was a prolific and popular nineteenth century American writer who wrote historical fiction of frontier and Native American life. He is best remembered for the Leatherstocking Tales, one of which was The Last of the Mohicans.

N.C. Wyeth (1882–1945) began his artistic career as a young adult. Born in Needham, Massachusetts, Wyeth traveled the American West extensively and drew what he saw. His prolific career includes three thousand works and more than one hundred book illustrations, including those for a majority of the Scribner Illustrated Classics series.
Loading...
or support indie stores by buying on