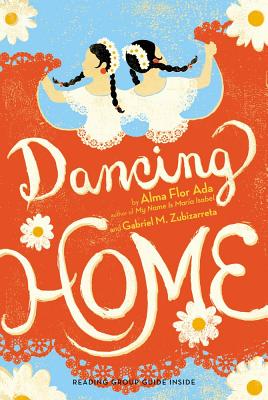 In this timely tale of immigration, two cousins learn the importance of family and friendship.

A year of discoveries culminates in a performance full of surprises, as two girls find their own way to belong.

Mexico may be her parents’ home, but it’s certainly not Margie’s. She has finally convinced the other kids at school she is one-hundred percent American—just like them. But when her Mexican cousin Lupe visits, the image she’s created for herself crumbles.

Things aren’t easy for Lupe, either. Mexico hadn’t felt like home since her father went North to find work. Lupe’s hope of seeing him in the United States comforts her some, but learning a new language in a new school is tough. Lupe, as much as Margie, is in need of a friend.

Little by little, the girls’ individual steps find the rhythm of one shared dance, and they learn what “home” really means. In the tradition of My Name is Maria Isabel—and simultaneously published in English and in Spanish—Alma Flor Ada and her son Gabriel M. Zubizarreta offer an honest story of family, friendship, and the classic immigrant experience: becoming part of something new, while straying true to who you are.

"The third-person narration shifts its focus gently from girl to girl, allowing readers access to their thoughts and feelings.... Although sometimes wise beyond their years, Margie and Lupe will charm readers as each girl struggles for belonging and acceptance in this realistic novel."

“This story will assist readers in embracing their own heritage and developing an appreciation for their classmates’ backgrounds. It’s an enjoyable offering (and a great read-aloud) that will capture readers’ attention and have them rooting for the cousins and their friendships and family relationships.”

"Ada, the author of many multicultural titles, including Tales Our Abuelitas Told: A Hispanic


Folktale Collection (2006), and Zubizarreta write knowingly of the difficulties of a life lived in two

cultures. A subplot involving Lupe’s father (who came to America illegally and later abandoned his

family) is also well handled, as is the inclusion of a Ruben Dario poem, “To Margarita.” Give this to fans

“It is the friendship between the girls and the tall, blond Camille…that makes this an absorbing novel for readers of any background. And the authors…handle the narrative with tenderness and charm.”

“Ada and Zubizarreta tackle important topics including immigration, bilingual education, and bullying. This book will speak intimately to readers straddling different cultures and grappling with what it means to be an American.”

Alma Flor Ada, an authority on multicultural and bilingual education, is the recipient of the 2012 Virginia Hamilton Literary Award, and in 2014 she was honored by the Mexican government with the prestigious OHTLI Award. She is the author of numerous award-winning books for young readers, including Dancing Home with Gabriel Zubizarreta, My Name Is María Isabel, Under the Royal Palms (Pura Belpré Medal), Where the Flame Trees Bloom, and The Gold Coin (Christopher Award Medal). She lives in California, and you can visit her at AlmaFlorAda.com.

Gabriel M. Zubizarreta draws from his experiences of raising his three wonderful daughters in his writing. He hopes his books will encourage young people to author their own destinies. He coauthored Love, Amalia and Dancing Home with Alma Flor Ada. Gabriel lives in Northern California with his family and invites you to visit his website at GabrielMZubizarreta.com.
Loading...
or support indie stores by buying on