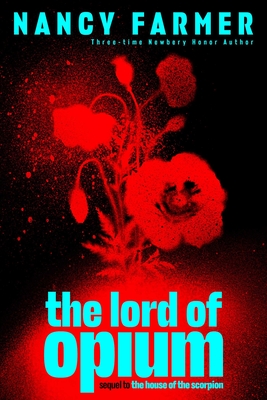 The Lord of Opium

As the teenage ruler of his own country, Matt must cope with clones and cartels in this riveting sequel to the modern classic House of the Scorpion, winner of the National Book Award, a Newbery Honor, and a Printz Honor.

Matt wants to use his newfound power to help, to stop the suffering, but he can’t even find a way to smuggle his childhood love, Maria, across the border and into Opium. Instead, his every move hits a roadblock, some from the enemies that surround him…and some from a voice within himself. For who is Matt really, but the clone of an evil, murderous dictator?

Praise For The Lord of Opium…

“In the much-anticipated sequel to The House of the Scorpion (2002), 14-year-old Matteo Alacrán returns home as the new Lord of Opium…. A vividly imagined tale of a future world full of fascinating characters and moral themes—a tremendous backdrop for one young man’s search for identity.”
— Kirkus Reviews, April 10, 2013

* "Most young readers who loved The House of the Scorpion (2002) when it was first released are now adults, and today’s teen audience will need to read the first title in order to fully understand Farmer’s brilliantly realized world…. A stellar sequel worth the wait.”
— Booklist, June 1, 2013, *STARRED REVIEW

* "This highly anticipated sequel to Farmer’s National Book Award–winning The House of the Scorpion (2002) begins soon after the funeral of the drug lord El Patrón and the murder of nearly everyone who attended the event. Fourteen-year-old Matt, the dead drug lord’s clone, was originally created to provide spare parts for El Patrón, but is now the Lord of Opium.... Once again, Farmer’s near-future world offers an electric blend of horrors and beauty. Lyrically written and filled with well-rounded, sometimes thorny characters, this superb novel is well worth the wait."
— Publishers Weekly, June 24, 2013, *STARRED REVIEW