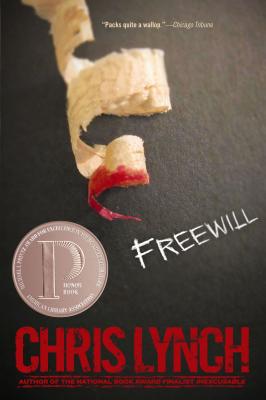 A rash of teen suicides haunts a teen with a murky history in this Printz Honor–winning novel.

Will was destined to be a pilot, to skim above surfaces. So why is he in wood shop class? He doesn’t know—or maybe he just doesn’t want to admit the truth.

When local teens begin committing suicide, their deaths all have one thing in common: beautifully carved wooden tributes that appear just after or before their bodies are found.

Will’s afraid he knows who’s responsible. And lurking just behind that knowledge is another secret, so explosive that he might not be able to face it and live…

"Packs quite a wallop."

"Lynch remains one of young adult literature's most intriguing writers."

Chris Lynch is the Printz Honor Award–winning author of several highly acclaimed young adult novels, including Printz Honor Book Freewill, Iceman, Gypsy Davy, and Shadow Boxer—all ALA Best Books for Young Adults—as well as Killing Time in Crystal City, Little Blue Lies, Pieces, Kill Switch, Angry Young Man, and Inexcusable, which was a National Book Award finalist and the recipient of six starred reviews. He holds an MA from the writing program at Emerson College. He teaches in the Creative Writing MFA program at Lesley University. He lives in Boston and in Scotland.
Loading...
or support indie stores by buying on