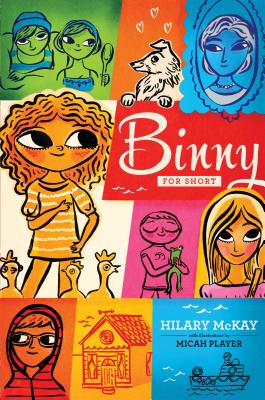 A tender, sweet, and hilarious novel about growing up with a loving family and a perfectly rambunctious dog, from an author who “has set the standard of brilliance” (Horn Book).

When she was eight, Binny’s life was perfect: She had her father’s wonderful stories and Max, the best dog ever. But after her father’s sudden death, money is tight, and Aunty Violet decides to give Max away—he is just too big for their cramped new life. Binny knows she can’t get her dad back, but she never stops missing Max, or trying to find him. Then, when she’s eleven, everything changes again.

Aunty Violet has died, and left Binny and her family an old house in a seaside town. Binny is faced with a new crush, a new frenemy, and…a ghost? It seems Aunty Violet may not have completely departed. It’s odd being haunted by her aunt, but there is also the warmth of a busy and loving mother, a musical older sister, and a hilarious little brother, who is busy with his experiments. And his wetsuit. And his chickens.

You’ll delight in getting to know Binny and her charming, heartwarming family in this start to a new series from the inimitable Hilary McKay.

Praise For Binny for Short…

"Try Hilary McKay. Her books are so good you want to climb inside the covers and live there."
— The Daily Telegraph

"A sensitive exploration of friendship, grief, and the often hilarious rough and tumble of families adjusting to change. More Binny please."
— The Daily Mail

"With humor, poignancy and a keen insight into human nature and family dynamics, Hilary McKay...moves in with the Cornwallises."
— Jennifer M. Brown

*"With humor, poignancy and a keen insight into human nature and family dynamics, Hilary McKay...moves in with the Cornwallises."
— Jennifer M. Brown

*"The writing is gorgeous, clear as water; the characters vivid and lively; the story so real each moment of loss, fear, delight and love absolutely visceral."
— Kirkus Reviews, starred review

* "Fans of McKay's Casson books will warmly welcome the delightful and eccentric Cornwallis family... the humorous and poignant interactions among Binny's caring older sister, independent younger brother, and insightful mother are the heart of the novel."
— Publisher's Weekly, starred

"This novel combines effervescent everyday-life storytelling with subtle exploration of the ripples of loss that shape young lives, and McKay fans will celebrate the introduction of an engaging new heroine."
— BCCB

*"McKay’s masterful control of the mayhem is ingenious; may the Cornwallis family, like the Conroys and the Cassons before them, have many adventures to come."
— Horn Book, Starred Review