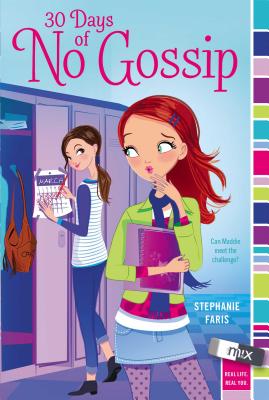 Can a middle school gossip queen change her ways, or will she lose her BFF for good? Find out in this M!X original novel.

Maddie Evans prides herself on being the gossip queen of Troy Middle School. She is the first person her classmates go to when they need the latest news on the ins-and-outs of TMS—and Maddie never disappoints.

Her best friend since birth, Vi, isn’t crazy about Maddie’s penchant for passing on rumors, but it’s never been an issue in their friendship. Until the day Maddie lets slip who Vi is crushing on—in front of her crush.

Vi is furious, and she confronts Maddie with an ultimatum: no gossip for 30 days, or twelve years of sisterhood goes down the drain.

Maddie agrees, but only a week into the challenge, she gets one of the juiciest pieces of gossip EVER—something that could affect the future of the school. Will she be able to keep her mouth shut and tame her ways? Or will she be left standing alone with no one to hear her stories?

Stephanie Faris knew she wanted to be an author from a very young age. In fact, her mother often told her to stop reading so much and go outside and play with the other kids. After graduating from Middle Tennessee State University she somehow found herself working in information technology. But she never stopped writing. When she isn’t crafting fiction, Stephanie is indulging her gadget geek side by writing for online technology sites. Her work is regularly featured on the small business blogs for Intuit and Go Payment and she is a featured columnist for SmallBizTechnology.com. She lives in Nashville with her husband.
Loading...
or support indie stores by buying on