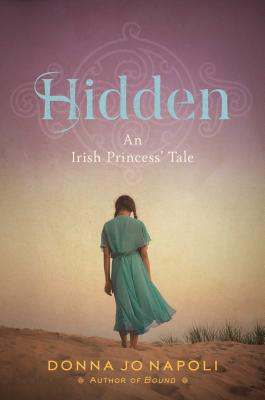 A young girl must learn to survive and find her family against all odds in this heartbreaking companion to Hush from award-winning author Donna Jo Napoli.

Lost at sea when her sister is taken captive on a marauding slave ship, Brigid is far removed from the only life she knew as a princess and the pampered daughter of an Irish king.

Now Brigid has few choices. Alone and abandoned, she disguises herself as a boy and vows to find her innocent sister taken into slavery. Through her search many years pass and she grows from being a child to a woman, tough Brigid does not give up. She lives from the land, meets friend and foe along the way, and gains a reputation as a woman thought to be fierce enough to conquer men. It is not fierceness that guides her but the love of isster and the longing for her family to be united. One day she finds her way, knowing that her only real power comes from within herself.

Based on the legend of the first Norse woman pirate, award-winning author Donna Jo Napoli has told a remarkable survival story spanning years and continents and one that transports and transforms readers.

Readers who enjoyed Donna Jo Napoli’s Hush (2007) and wondered about the fate of eight-year-old Brigid finally have their answers. The author uses her amazing ability to find the bare bones of an old story and flesh them out into a rich, living tale. This time, it is the story of Alfhild, feared female pirate of 10th-century Norse lore. Brigid survives her plunge into icy waters when escaping the slave ship she and her sister Melkorka were aboard. Upon realizing Mel did not escape with her, she is determined to find her sister, no matter the long odds. But how to find one beautiful slave girl possibly traded anywhere in tenth century Europe? Brigid, or Alfhild as she comes to be called, ponders this question as she learns, grows, and thrives. Over several years, her circumstances change, allowing her to gain new skills as she travels from town to town, family to family, and between social classes. Her sister, her blood family, is the reason Alfhild continues her search, but the many adoptive families she becomes part of strengthen her to continue her quest. Brigid is a fictional character but Alfhild is an actual historical figure—this blending to fit a historical framework produces continued good fortune, which lends the work a folktale feel at times. Napoli seamlessly weaves cultural, mythological, and historical information together, immersing the readers in Norse life.
— School Library Journal, *STARRED REVIEW

Set in tenth-century Denmark and its environs, Hidden follows the fortunes of Brigid, sister of Melkorka, the main character of Napoli’s Hush: An Irish Princess’ Tale. Unlike Melkorka, Brigid escapes from the Russian slaver who has abducted them, taking refuge first with a family in northern Jutland; then with Astrid and Beorn, a former slave and her new husband; and finally with a queen and king in Jutland’s main trading center. Now known as Alfhild (or “elf battle,” for her seemingly otherworldly arrival and strong, upstart nature), Brigid becomes a competent sailor and archer; eventually, despite the love she bears her foster families and suitor, she heads out to search for news of her sister. She and her crew of women become notorious pirates (Napoli was inspired by the story of Alfhild, the first Norse woman pirate), roaming the Baltic and freeing those captured by slavers and returning them to their families. This is a warm-hearted, adventure-filled romp, steadied and enriched by enough historical underpinnings that it treads the fine line between historical fiction and romantic fantasy with aplomb. Napoli’s portrayals of Norse language and culture, cultural assimilation and the slave trade, and sisterly loyalty contribute equally to the story’s entertainment value.
— Horn Book Magazine

In this companion novel to the poetic and haunting Hush: An Irish Princess Tale (BCCB 3/08), the younger sister of Melkorka, that book’s protagonist, gets full focus. Brigid is fiery and outspoken, even at eight, when she escapes from slavers, loses her sister and her comfy royal life in Ireland, and finds herself truly alone in a region far from home. She wanders, always with the goal that she will find her beloved sister and reunite her family, but she’s also trying to pick up skills, comfort, and knowledge along the way. Brigid quickly determines that pretending to be of Norse origin is much smarter than being her Irish self, so she adapts and prevari- cates, remaking herself as Alfhild, the perhaps elf, perhaps slave, perhaps orphan child who fits herself where she can in various Nordic communities. The pace is languid on occasion, particularly in the middle chapters as Alfhild grows from child to teen, but it picks up considerably toward the end, as chapters involving bold rescues and female pirates are wont to. There is a dramatic spareness to the first-person narration: Alfhild remains in many ways a child despite her advancing age, and her understanding of the world is authentically rather limited, given her life circumstances. The reader will likely spot places where Alfhild’s perspective on a situation is incorrect or too harsh, and she must figure out the more accurate reality. Extensive end matter explains the bits of truth, myth, legend, and fiction that all went into making these characters, particularly the memorable Brigid/ Alfhild, whose unwavering determination propels her through joy and tragedy with equal steel, almost costing her moments of beauty because she is so focused on whatever comes next. A glossary, an author’s note explaining the history, and a bibliography are appended.
— Bulletin

Donna Jo Napoli is the acclaimed and award-winning author of many novels, both fantasies and contemporary stories. She won the Golden Kite Award for Stones in Water in 1997. Her novel Zel was named an American Bookseller Pick of the Lists, a Publishers Weekly Best Book, a Bulletin Blue Ribbon, and a School Library Journal Best Book, and a number of her novels have been selected as ALA Best Books. She is a professor of linguistics at Swarthmore College in Pennsylvania, where she lives with her husband. Visit her at DonnaJoNapoli.com.
Loading...
or
Not Currently Available for Direct Purchase