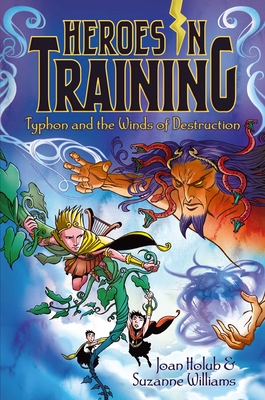 Typhon and the Winds of Destruction (Heroes in Training #5) (Hardcover)

Twice the quests means twice the adventure for Zeus and his fellow Olympians.

After battling fireball-throwing Titans, the young Olympians find themselves on a double quest: Not only must they find more Olympians that Cronus has swallowed, but they’re also in search of magic seeds that will help rejuvenate the earth after the terrible drought that plagued the lands, thanks to Hyperion. But a wind-throwing giant named Typhon has other ideas. Can the Heroes in Training withstand the storms that are coming their way?

Craig Phillips has been creating cover art and drawings for books, comics, and magazines for nearly two decades. He is most at home working on tales about myth and magic. His latest book—Giants, Trolls, Witches, Beasts: Ten Tales from the Deep, Dark Woods—is a 200-page graphic novel about just that! It will be in stores in May 2017. When he is not drawing and writing, he likes to swim in the lakes and walk in the forests and mountains of New Zealand. Visit him at CraigPhillips.com.au.
or
Not Currently Available for Direct Purchase
Copyright © 2020 American Booksellers Association