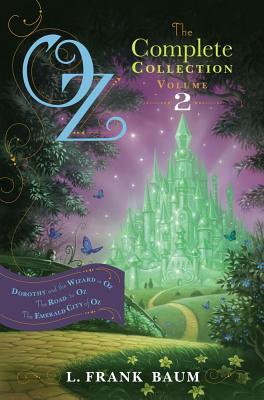 Dorothy and the Wizard in Oz; The Road to Oz; The Emerald City of Oz

Delve deeper into the world of Oz in this collection of books four through six in L. Frank Baum’s classic American fairy tale series.

The fourth, fifth, and sixth titles of the iconic Oz series, now in one collection!

In The Road to Oz, Dorothy sets out on another adventure with some new friends like the Shaggy Man, Button-Bright, and Polychrome, and some old ones like the Scarecrow and the Tin Woodman. Will they reach the Emerald City in time for Ozma’s birthday?

In The Emerald City of Oz, Dorothy, her Uncle Henry, and Aunt Em are going to live in the Emerald City. They set out of explore the land of Oz with the help of Dorothy’s friends, but must rush home again when they discover that the Nome King is busy gathering an army for an invasion of Oz. Will they be able to stop the invasion?