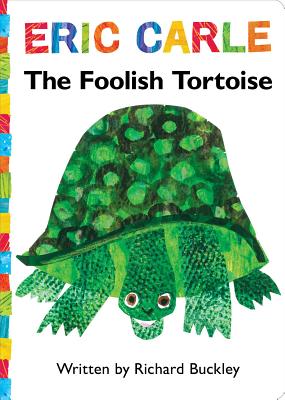 The timeless tale of The Foolish Tortoise, illustrated by Eric Carle, has a home on laps everywhere in this oversize board book edition!

The foolish tortoise is tired of being so slow. He decides that the easiest way for him to move faster is to get out of his heavy shell. The only problem is, once he leaves his home, he’s too scared to walk anywhere! This silly tortoise learns the hard way that there’s no place like home.

Children and adults alike will enjoy this jubilant tale of a tortoise on a journey of self-discovery. This oversize board book edition of a classic tale whimsically illustrated by Eric Carle features a refreshed cover design and is perfect for storytime and anytime.

Richard Buckley is a much-traveled English writer of both prose and poetry. He has lived in New York, Paris, and London, but his present home is in Cheltenham, England, where he has lived for the past thirty years, bringing up two sons with his wife (and muse) Elfie. His books for children include The Dutiful Penguin, The Foolish Tortoise (with Eric Carle), The Greedy Python (with Eric Carle), and The Bird Who Couldn’t Fly (with Alex Williams).