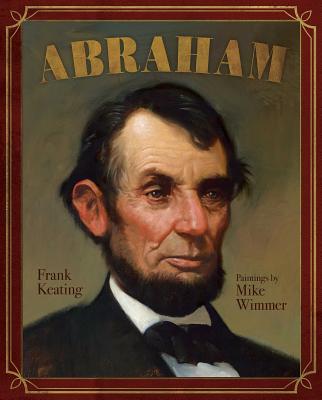 Frank Keating takes you on an ultimate tour of Abraham Lincoln’s life from boyhood to presidency in this biography, which includes stunning paintings by award-winning artist Mike Wimmer that bring the sixteenth President of the United States to vivid life.

To say Abraham Lincoln came from humble beginnings is an understatement. He was born in a Kentucky log cabin with a packed-dirt floor, rough slab roof, and leather-hinged door. He went barefoot for most of the year and wasn’t expected to amount to much. But reading was everything to him and his free time was consumed by books. Abraham Lincoln read furiously, studied law, and knew that hard work was his only path to making a change in the world. When he ran for the presidency, he stood for unity—one people and one land. He brought freedom to all citizens, ended slavery, and made the country whole again.

This visual tour de force is based on historical documents and chronicles Honest Abe’s life from boyhood to his extraordinary leadership position as the sixteenth President of the United States of America.

Frank Keating has held many positions in public office, including Assistant Secretary of the Department of the Treasury and Associate Attorney General of the United States. He was elected Governor of Oklahoma in 1995 and completed his term in January of 2003. He lives in Oklahoma.

Mike Wimmer has illustrated many books for children, including Home Run: The Story of Babe Ruth by Robert Burleigh, which was named an ALA Notable Children’s Book and was called a “grand slam” in a starred review in Publishers Weekly. He also illustrated Flight: The Journey of Charles Lindbergh by Robert Burleigh, which received the Orbis Pictus Award for nonfiction. He lives in Georgia with his family.

"Following Theodore (2006) and George (2012), Keating adds a new face to the Mount Rushmore series.In a first-person narrative that incorporates many quotations of his own words, the 16th president looks back on his life and accomplishments ... Wimmer's oil-on-canvas paintings are the star." -- Kirkus
— Kirkus Reviews

"This tribute would serve as a good introduction to our sixteenth president ... A worthy addition to children’s collections, the book’s oversize format and vivid illustrations make this a natural choice for February displays and read-alouds."
-- Booklist
— Booklist

"This attractive biography is sure to please presidential fact finders. The text is written in the first person, with actual quotes from Lincoln interspersed throughout. A copy of the Gettysburg Address is included in the back matter. Wimmer’s paintings are gorgeously detailed and elevate the text while providing context, especially for young ones. VERDICT Libraries that own the other installments of this series as well as anyone looking for a great presidential biography will want this addition for primary grade collections." - School Library Journal
— School Library Journal
or support indie stores by buying on
Copyright © 2020 American Booksellers Association