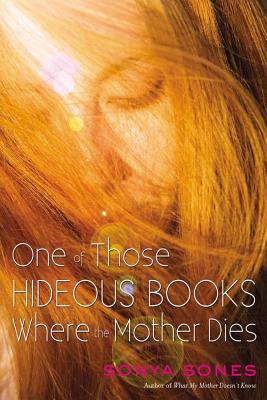 One of Those Hideous Books Where the Mother Dies

When Ruby’s mother dies, she’s dragged three thousand miles away from her gorgeous boyfriend, Ray, to live in LA with her father, who she’s only ever seen in movies. He’s a mega-famous actor who divorced her mom before Ruby was even born, and while the rest of the world may love him, Ruby definitely does not.

But as time passes and pages turn, Ruby comes to understand that circumstances are far more complicated than they seem, and sometimes forgiveness is found where you least expect it. This award-winning and bestselling novel in verse weaves a gripping narrative that is accessible as it is compelling.

Praise For One of Those Hideous Books Where the Mother Dies…

"A winning portrayal of a teenage girl's loves and losses."

Sonya Sones has written five YA novels-in-verse: To Be Perfectly Honest (A Novel Based on an Untrue Story), Stop Pretending, One of Those Hideous Books Where the Mother Dies, What My Mother Doesn’t Know, and its companion, What My Girlfriend Doesn’t Know. Her books have received many honors, including a Christopher Award, the Myra Cohn Livingston Poetry Award, and a Los Angeles Times Book Prize nomination. But the coolest honor she ever got was when What My Mother Doesn’t Know made it onto the American Library Association’s list of the Top 100 Most Banned Books of the Decade (to see why, see p.46). She lives near the beach in southern California, and only tells the occasional fib. Visit her at SonyaSones.com or follow @SonyaSones on Twitter.
Loading...
or support indie stores by buying on