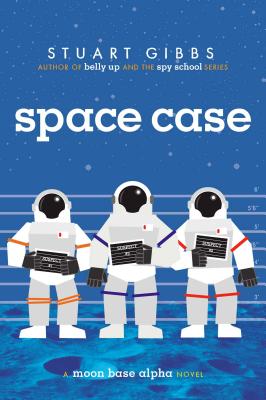 It’s a murder mystery on the moon in this humorous and suspenseful space adventure from the author of Belly Up and Spy School.

Like his fellow lunarnauts—otherwise known as Moonies—living on Moon Base Alpha, twelve-year-old Dashiell Gibson is famous the world over for being one of the first humans to live on the moon.

And he’s bored out of his mind. Kids aren’t allowed on the lunar surface, meaning they’re trapped inside the tiny moon base with next to nothing to occupy their time—and the only other kid Dash’s age spends all his time hooked into virtual reality games.

Then Moon Base Alpha’s top scientist turns up dead. Dash senses there’s foul play afoot, but no one believes him. Everyone agrees Dr. Holtz went onto the lunar surface without his helmet properly affixed, simple as that. But Dr. Holtz was on the verge of an important new discovery, Dash finds out, and it’s a secret that could change everything for the Moonies—a secret someone just might kill to keep...

*STARRED REVIEW* "The whodunit is smartly paced and intricately plotted. Best of all, the reveal is actually worth all the buildup. Thrillers too often fly off the rails in their final moments, but the author's steady hand keeps everything here on track. Fully absorbing."
— Kirkus Reviews

“The lunar setting puts a fresh spin on the locked-door mystery genre. . . . Fans of the Spy School series will welcome this debut entry in Gibbs’s latest run.”
— Bulletin